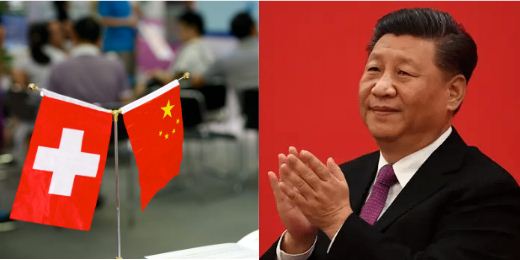 Even as China tries to expand its footprint in Europe, Switzerland seems to be assisting China in its ulterior motives. As per The Guardian, the full text of a secret Sino-Swiss deal that allowed Chinese security officials access to the country at the cost of Swiss taxpayers’ money has been revealed. Meanwhile, the Swiss government is trying to push this secret agreement for renewal.

The five-year “readmission agreement” was signed in the year 2015 and expired earlier this week on Monday. The agreement has sparked concern and outrage, over its extraordinary commitment to secrecy as well as the inherent dangers involved with letting Chinese agents, or spies, easy access to Switzerland and even Europe. Among other things, the agreement is coming under the scanner over Chinese espionage fears.

Switzerland has signed more than 50 similar agreements with other countries. However, the Sino-Swiss deal is different. Safeguard Defenders, an Asia-focused human rights campaign group, obtained the official English translation of the Sino-Swiss “readmission agreement”.

Now, what is surprising is that a comparison of readmission agreements signed by Switzerland with China and other countries like India, the UK and Sweden reveals startling details. While Switzerland published its other agreements, the China agreement was kept a secret for quite some time.

Moreover, all other agreements were concluded with the immigration department or its equivalent of the other states. But Safeguard Defenders has claimed that in China’s case, “it was with China’s Ministry of Public Security (MPS). While the ministry is in charge of immigration, it is also the nation’s police agency, in charge of policing, national security, and with dedicated branches dealing with espionage and counterintelligence.”

Why spies, police, security, and intelligence officials should be made a part of a “readmission agreement” that purportedly deals with illegal immigration? Even worse, there were no provisions in the bilateral agreement to supervise what the MPS officials were up to beyond their work with the Swiss authorities. Also, Switzerland committed to keeping the identity of Chinese officials confidential.

So, agents from China’s super-ministry, or the MPS, that also deals with espionage and counterintelligence could enter Switzerland without compromising their identity. These officials could then do what they want without being subjected to supervision. Peter Dahlin, Director of Safeguard Defenders, said, “What they do during that two weeks is completely unsupervised.”

Anyhow, Dahlin said that the unofficial status of Chinese agents probably implied that they were travelling on tourist visas. So, the entire Schengen Continent comes on the radar of Chinese MPS agents. Dahlin added, “Theoretically, the fact that it’s allowed is remarkable … If this was kept secret, which means other governments wouldn’t know.”

What makes the entire situation worse is the infamy that surrounds China’s Ministry of Public Security. As per Safeguard Defenders, “It (MPS) is also a body implicated in widespread, systematic, and wide-ranging human rights abuses.”

Leo Lan, a spokesman for the Chinese Human Rights Defenders campaign group said, “Given China’s appalling record of detainees’ rights, it’s also a legitimate concern if the repatriated persons would be exposed to torture or other ill-treatment if they were detained.”

Given all the European propaganda about human rights and refugee protection, it is quite shameful how Chinese spies were being given a free rein by the Swiss government. Worse still, Switzerland that hosts organisations like the United Nations High Commissioner for Refugees is actually looking to renew the preposterous agreement with Beijing.

The unholy Sino-Swiss nexus is therefore allowing the paper dragon to have its way in Europe and possibly carry out espionage activities with sheer impunity.