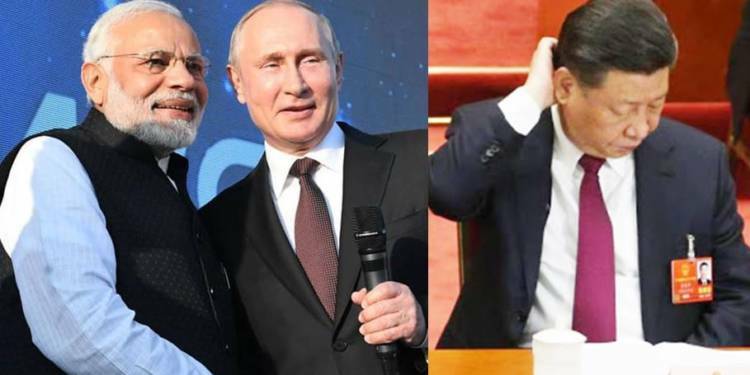 Russian President Vladimir Putin has now understood how lethal it will be to put all eggs in one basket. Thus, instead of entirely buying the rosy picture that Xi Jinping is painting, he has gone ahead and called for partnership with India in the Eurasian Economic Union. He has said that the expansion of EAEU to include big economies like India and linking it with the BRI will be the aim going forward. China has always been a victim of its own obsession with history. Since the time of Mao, China had wanted to take the leadership role of the Communist world away from the USSR, and after the USSR broke and China opened up, the dynamics changed yet Beijing’s obsession reminds as now also it wants Russia to play second fiddle in the facade of the friendship they profess to have.

Now too, China has sold the idea of Belt and Road Initiative and made Russia believe that it is an integral part of the whole concept, but these rosy words have not shown any significant infrastructural or other kinds of developments on the ground. After multiple incidents and actions by Beijing, Moscow seems to have deduced that it needs to move out of China’s embrace and come back to old and reliable friends like India.

Russian President Vladimir Putin recently said that “An agreement on cooperation between the Eurasian Economic Community and large economies such as China and India is currently being implemented. The first round of negotiations on a free trade agreement with India will take place in the near future.” Moscow is now diversifying its investments and geopolitical options away from solely being shackled by Chinese friendship.

In July too, Moscow had expressed that it will not play second fiddle to the Chinese by its actions as the Russian Foreign Minister Sergei Lavrov was absent from a ministerial meeting which was attended by the representatives of 25 countries. Igor Denisov, a senior research fellow at the Moscow State Institute of International Relations said, “Russia is not part of the BRI. It is only a supporter of Chinese global outreach as long as it is in Russia’s interests.”

To put it in perspective, China has not accepted any of the 40 transportation project proposals that the Eurasian Economic Union made. And till 2019, China did not find a single EAEU project worth integrating it with the “Belt and Road” initiative. Beijing wants Russia to keep playing second fiddle, but Putin is not a docile world leader and given his experience in sparring with the whole of the western world alone, Xi Jinping cannot subdue him. Thus, the imperial designs of Beijing could not precipitate into Russian borders.

Given the temperament of Putin, he gave enough time to the Chinese to mend their ways and ally with the Russians on an equal basis, however, Xi Jinping is trying to take on the whole world and even Russia’s long term friend India. Putin has had enough of Chinese belligerence and has now committed to formalising a free trade agreement with India which will further expand the Eurasian Economic Union.

There is a big difference between what China says and does. As reported by FT, of 91 projects launched as part of a Program of Cooperation between Northeast China and Russia’s Far East, which began in 2009 and was shut down in 2018, only 15 were in the implementation phase as of 2015, and instead, the region is now threatened by the Chinese intelligentsia claiming it to be their territory, thus forcing Moscow to increase its military deployment there. In Spite of this, Putin gave another chance to the Chinese to prove their intentions, and the COVID-19 pandemic showed Beijing’s true colours.

Instead of acting as a friend, China sent its spies into Russia to steal Russian military technology, tried to overshadow Russia vaccine diplomacy by using its pawn, that is, WHO, among other nefarious designs. And no friend does this at a time of crisis, all of this combined must have made Putin sure of diversifying its strategic interests. As the first round of talks between India and Russia regarding the Free Trade Agreement, Putin would want to incorporate India in the EAEU. This has solidified the floating idea that Putin is trying to snub XI Jinping’s dream project, BRI.

China happily endorsed Biden over Trump. But the move has backfired as Biden’s fanboys and fangirls threaten Xi Jinping