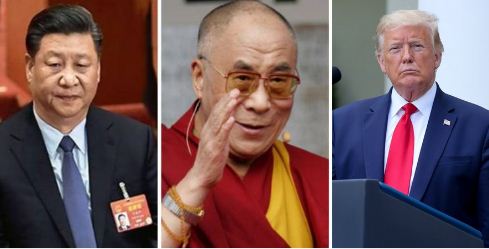 US President Donald Trump is ensuring that he is killing all opportunities for any rapprochement between Washington and Beijing. And now the US President is using the biggest weapon in his arsenal against China. We are talking about Tibet- an ancient Buddhist monarchy which is presently under Chinese military occupation.

One of Chinese Communist Party’s decades-old ambitions has been to overwhelm the Tibetan Buddhist tradition. Beijing has time and again expressed intention to install a CCP loyalist as the next Dalai Lama- the highest spiritual leader of Tibet, who is also considered a living Buddha. But now the Trump administration has foiled China’s plans to appoint a Beijing-loyalist as the next Dalai Lama.

On Tuesday, the US Senate unanimously passed the Tibetan Policy and Support Act or TPSA of 2020. The historic legislation was stuck at the Senate Foreign Relations Committee since May. Central Tibetan Administration (CTA) President Lobsang Sangay reportedly said that the TPSA makes it official that decisions regarding the incarnation of the Dalai Lama are the exclusive domain of the current Dalai Lama, the Tibetan spiritual leaders and the Tibetan people.

Sangay said, “Any interference by Chinese government officials will be met with serious sanctions and be deemed inadmissible into the United States.” So, if China actually tries to force its will upon the Tibetan tradition, then it may as well have to bear the brunt of painful American sanctions.

The question of the Dalai Lama’s succession is becoming increasingly important. The 14th Dalai Lama Tenzin Gyatso, who lives in India after he was forced to flee his homeland by China in 1959, is now 85-years old. With the Dalai Lama’s advancing age, the Xi Jinping administration in China is looking to push the envelope in Tibet.

The successor to Dalai Lama is traditionally chosen in accordance with spiritual signs and visions, by senior monastic disciples. However, China is least bothered about the preservation of Tibetan Buddhist principles. In 2011, the Chinese Foreign Ministry announced that it would appoint the next Dalai Lama. Beijing had also declared that it would not recognise any other succession candidate.

Chinese President Xi Jinping has time and again, expressed a serious sense of insecurity about Tibet. What Xi wants to do is remove every vestige of Buddhist tradition from Tibet, and for achieving this purpose, he wants to appoint a loyalist as the 15th Dalai Lama. The idea behind a CCP loyalist as the Dalai Lama is to kill the very spirit of the ancient Tibetan Buddhist tradition.

But the TPSA will ensure that China will have to pay unbearable diplomatic and economic costs if it tries to manipulate the Dalai Lama lineage. Now, it is almost completely unlikely that China will invite nasty US sanctions by meddling in Tibet’s internal matter of succession to the 14th Dalai Lama.