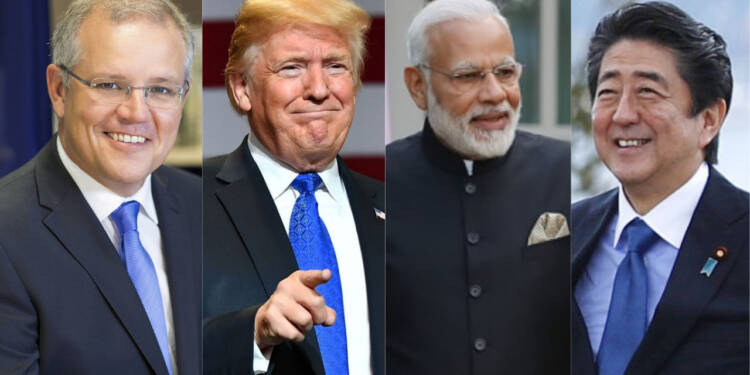 The current US President Donald Trump has had a lot of foreign policy successes and his recognition of China as a threat for USA’s Asia Pacific alliance network and acting with such a speed to reinvigorate the QUAD has to be among the top picks. And as the possibility of Trump leaving the office this January seems possible, he has awarded his mates in this Indo-Pacific journey, Indian PM Narendra Modi, ex-Japanese PM Shinzo Abe and Australian PM Scott Morrison the Legion of Merit.

The importance of this honour and the occasion is two-fold. On one hand, it is the highest degree Chief Commander of the Legion of Merit, which is given only to the Head of State or Government and can be considered to emphasise on the importance of that leader and their country for the United States. And on the other hand, the fact that it was presented to the three close-knit US partners of its grand Indo-Pacific strategy and the fellow leaders of QUAD member countries. The culmination of the turbulent 2020 with this event, signals that the developments concerning the activities of QUAD were only a precursor to the engagement and cooperation these countries will have in 2021 and beyond.

The policies of these leaders and their relentless cooperation made China sweat much-deserved drops of panic this year, as it shifted from outright denial of the QUAD and the Indo-Pacific policy, by calling it a sea-foam that will disperse, to now calling it a NATO variant in Indo-Pacific. China has become all the more fearful of QUAD since the production and success of the second ministerial-level meeting in Tokyo. During his Malaysian trip, Foreign Minister Wang Yi suggested that the Quadrilateral Security Dialogue(QUAD) is an attempt by Washington to create an ‘Indo-Pacific NATO’. He also warned that such an initiative would seriously undermine regional security which was a drastic change in policy for the Chinese.

Read more: China is so rattled by QUAD that it has started calling it the Indo-Pacific NATO.

India’s Ambassador to the US, Taranjit Singh Sandhu, accepted the award on behalf of the Prime Minister from the US National Security Advisor Robert O’Brien at the White House. Mr O’Brien tweeted that President Trump “presented the Legion of Merit to Indian Prime Minister Narendra Modi for his leadership in elevating the US-India strategic partnership.”

The messages for PM Modi’s Japanese and Australian counterparts were also related to certain facets of the Indo-Pacific policies and as a result, one can easily conclude that it was Trump’s way of appreciating and celebrating his dealings with these three leaders and the positive impact their friendships have had on the bilateral and the multilateral relations among each other.

Donald Trump has sent his farewell gifts to his QUAD mates and brothers-in arms-for the support they provided to one another and the extent to which they went to maintain the multipolarity in the region and to successfully counter the ever-increasing adventurism of the Chinese Communist regime.