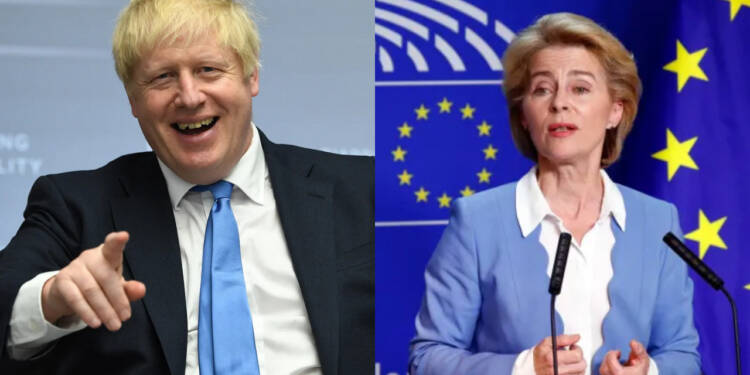 The UK voted to leave the European Union back in 2016 and left it early this year on 31 January 2020, but the Conservatives led by Prime Minister Boris Johnson had to wait till yesterday to formally announce the mutual divorce. As of Christmas Eve, London finally has a separate trade deal with the EU and it is free from the writhing shackles of tariffs that the membership of EU brought along with it.

The Tories leader took to Twitter to post a gleaming photo of his victory with the caption: “We have taken back control of our laws and our destiny.

The deal is done. pic.twitter.com/zzhvxOSeWz

The EU is the UK’s nearest and biggest trading partner and the UK government says the deal covers trade that was worth £668bn in 2019. As per the summary published on the UK government website of the UK-EU Trade and Cooperation Agreement, both sides have agreed to “unprecedented 100% tariff liberalization”.

This is the “first time” that the 27-nation-bloc has agreed to a ‘zero tariffs zero quota deal’ with any other trading partner, starting from January 1, 2021. Apart from cooperation in the trade that is roughly half of the $900 billion of annual EU-UK commerce, both London and the EU have also ensured “streamlined co-operation on law enforcement” to tackle crime as well as terrorism.

“There is no role for the European Court of Justice and no requirements for the UK to continue following EU law.” read the summary.

The to and fro battle

The tantalizing to and fro battle of the Brexit deal between London and the EU was supposed to finalize in a much shorter time period. However, Brussels kept on using the ongoing pandemic and several other contentious issues such as sovereignty over the fishing waters as an excuse to stretch the process.

While fishing is a relatively small part of the economy on both sides of the English Channel, the issue is extremely emotive and its political consequences far outweigh the economic impact on both sides. Boris Johnson had passionately batted for gaining the sovereignty of the fishing waters and during the 2016 referendum remarked that if London were to leave the EU, they (Tories) would get back control over their national waters.

And by the initial looks of the trade deal, it seems that the Tories have got their way with the EU regarding the boats and the boundaries.

“The Agreement firmly and explicitly recognises UK sovereignty over our fishing waters and puts us in a position to rebuild our fishing fleet and increase quotas in the next few years, finally overturning the inequity that British fishermen have faced for over our decades.”

In a press conference in Brussels, European Commission President, Ursula von der Leyen said, “This was a long and winding road but we have got a good deal to show for it.” She said the deal was “fair” and “balanced” and it was now “time to turn the page and look to the future”. The UK “remains a trusted partner,” she added.

The opposition which had been vociferous in their opposition to Brexit also tamely surrendered and called that it will support the motion in the House of Commons. The Labour Party leader Sir Keir Starmer gave his formal assent to the deal and it looks certain that the deal will be passed in the Parliament before the end of the year.

As explained earlier, the UK had been in a transition period for over 10 months now. Under the transition phase, the rules on trade, travel, and business remained unchanged. However, with only 6 days to go to the end of the year, the companies in the UK will have to hurry around as the UK will be treated as a third country by Brussels.

Read: In your face European Union! The UK signs a bigger and better post-Brexit trade deal with Japan

Despite the stick given to Boris Johnson throughout his tenure by the opposition, he managed to land a deal that his predecessors couldn’t. In the end, the scrimmage that was expected to be nailbiting turned to be a dud affair as Brussels tapped out meekly.