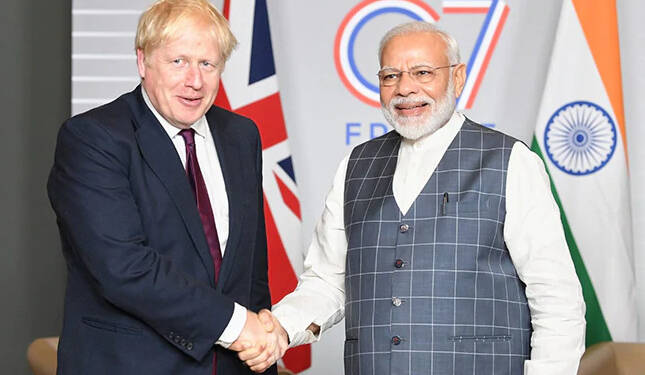 As the results of the US elections sets in, panic in a post trump presidency has sent alarm bells ringing in the UK. Boris Johnson, Prime Minister of the United Kingdom, shared an amiable relation with Donald Trump, but now he must endure the squeeze of a Biden presidency trying to reverse the policies of his predecessor.

The UK-US relations hold a special place in the foreign policy chapters of these nations. Throughout history, both these nations have irrevocably supported each other. But with the changing dynamics of the European Union, post-Brexit has amassed tremendous pressure on the UK incumbent to balance this special relationship while also pursuing Britain’s national interest.

Joe Biden had opposed the Brexit and now is threatening to suspend the negotiations in the UK-US trade deal if a no-deal Brexit materializes and impacts the Good Friday agreement. This is why, Boris Johnson is looking expectantly at India to help it in a post-pandemic, no-deal Brexit international structure.

The Brexit negotiations have been going on since 2016. With a no-deal Brexit–the most likely outcome–it is being opposed by none other than the US president-elect Joe Biden. Trump shared a close relationship with Boris and had backed the UK in case of a no-deal Brexit concerning the special relationship which the two states shared.

Joe Biden seems to have lost all love and respect for the relations across the Atlantic as he forces and threatens Britain to negotiate a deal with the EU and not undermine the Good Friday Accord.

Nancy Pelosi, leading democrat and house speaker said, “If the UK violates its international agreements and Brexit undermines the Good Friday accord, there will be absolutely no chance of UK-US free trade agreement passing the Congress.”

While the UK government has assured that the UK remains committed to the Good Friday Agreement and intends to prevail on it absolutely, constant threats of no trade negotiations have begun to pinch the British administration. Therefore a trade deal with India looks set for a post-Brexit British economy.

The UK has been strategically cozying up to India. Foreign Secretary Dominic Raab, at India Global week voiced his desire to take this partnership to the next level. For the UK, Brexit, Covid-19, and the sharpening rise of the Chinese power makes it imperative to have stronger ties with India. Moreover post Brexit Britain needs an open, innovative and dynamic relationship with India to demonstrate that Britain could thrive beyond the immediate European hinterland and across the Atlantic.

For Boris, therefore, seeking closer relations especially in trade and securing an FTA will be of utmost importance and will be central to his ability to balance the cross Atlantic relations and to deliver Brexit dividends at home.

While China would be drooling to swoop on trade pickings to establish a strong Geo-Political interest in the region, it looks set to be disappointed as Boris Johnson is looking ahead to alter its investments out of China and into India.

Besides, India’s role as the emerging leader of the anti-China Nexus has furthered UK’s ambitions for deepening ties with India. Boris Johnson ended UK’s golden period with china as he sought to disinvest and diversify from China. He realized the total dependency on Chinese goods as a threat to the UK’s security, as was evident during the pandemic.

Moreover, the United Kingdom’s eastward outlook is centered on India as it looks set to build upon its strategic relationship with its former colony. In a similar move to Germany, France, and the Netherlands, UK expectedly will launch its “Indo-pacific” vision along the lines of India’s vision for the region.

Furthermore, to ensure a free and independent world order, the UK is looking forward to cooperating with India in the disputed South China Sea as the UK looks to project its power globally and affirm the right to freedom of navigation from an increasingly assertive China.

Read More: Is UK planning to come to the South China Sea to take on China? Post-BREXIT, definitely

The elections in the US have had a ripple effect on states which had good relations with President Trump. The UK’s special relations with the US do not look so special anymore, as a China loving president resides in the oval office. The pandemic has shown that there’s a reason which needs to be heard to disinvest from China. Moreover, with Brexit, the UK is looking forward to expanding its presence and building dynamic ties with India to support its ambitions.