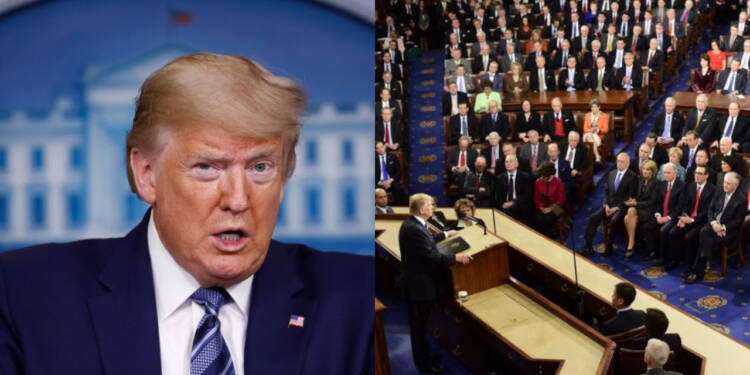 If one observes Donald Trump from an unbiased perspective, he is a very straightforward person who has a simple objective of thinking the best for Americans first and then dealing with the rest of the world by making them understand that his primary objective is non-negotiable. However, many in his own country and especially in Washington do not understand this, and then get surprised by the most obvious and expected reactions by Mr Trump.

The current decision of President Donald Trump to veto the $740 Billion US Defence Policy bill comes as according to him, the bill fails to include the national security measures and includes provisions that fail to respect the hard work of their veterans and historically, the US military.

In his letter dated 23rd December, he also added that “The Act fails even to make any meaningful changes to Section 230 of the Communications Decency Act, despite bipartisan calls for repealing that provision. Section 230 facilitates the spread of foreign disinformation online, which is a serious threat to our national security and election integrity. It must be repealed.”

Although, when the bill was passed in the congress, democrats were all going gaga over this, only to get upset 10 days later with the president vetoing the bill and making it useless. The deep state by this bill tried to restrict the Trump administration from making some permanent damage to their war designs as they plan to make war the business of the United States again, removing the restructuring done by President Donald Trump. As Republican Sen. Rand Paul said, “The philosophy of these people is about war and substantiating war and making sure that it becomes and is perpetual war.”

President Trump is on the last leg of ensuring the US departure from Afghanistan. The US currently has around 5000 troops stationed in Afghanistan, and after the ambitious and fast-paced withdrawal espoused by President Trump is complete, roughly 2,500 will remain. By this, Mr Trump wants to ensure to fulfil his campaign promises and make sure that the war lobby may not have its way.

Read more: Near-complete withdrawal of US troops from Afghanistan will be Trump’s final fatal blow to the Deep State.

He also added that the bill goes exactly against the vision of his foreign policy, as the bill restricts the President to be able to make the final decision regarding the deployment of the military and this goes against the basic structure of the United States of America.

In his letter, he very articulately mentioned that the Act purposefully tries to restrict President Trump’s ability to withdraw troops from foreign countries, which he mentioned more specifically being Afghanistan, Germany, and South Korea. He says that it is unconstitutional as Article II of the Constitution makes the President the Commander-in-Chief of the Army and Navy of the United States and vests their executive power in his hands. Therefore, the decision regarding how many troops to deploy and where, including in Afghanistan, Germany, and South Korea, rests within his position. In his terms, the Congress should not even try to arrogate this authority to itself directly or indirectly as is clarified by the restriction this bill tries to impose.

With one decision and an accompanying letter, President Trump has given a jolt to the deep state by undoing their designs and by explaining everything lucidly, he has laid bare their agendas before Joe Biden comes to power.