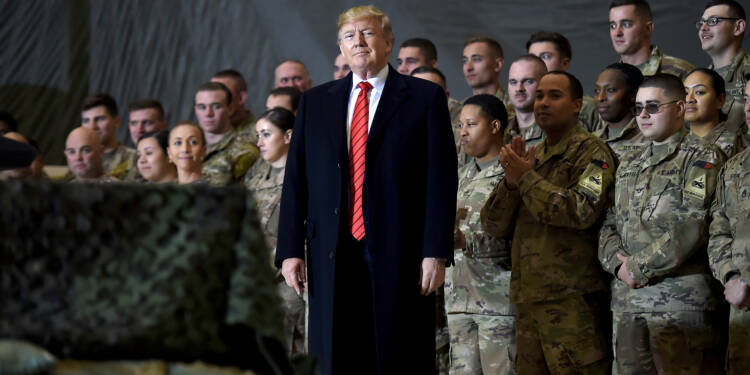 President Donald Trump is making sure of the fact that if Joe Biden takes over as the 46th President of the United States, he carves a distinctive image and legacy for himself, particularly on the foreign policy front. President Trump is said to have expedited the American troop withdrawal plan from Afghanistan, amid bipartisan criticism of the said decision. Whether Trump is right or wrong to do so will only be seen in the coming times, but his decision to reduce American troop strength in Afghanistan to a mere 2,500 is definitely a bold one, and shows that the President believes what he is doing is for the larger good of America, even if not for West and South Asia.

As Joe Biden being inaugurated President on January 20 next year seems as an imminent possibility now, Trump has decided to deliver the final fatal blow to the American deep state in the last few weeks of his presidency. It is no secret that the American deep state has pushed the United States into multiple wars, mostly unnecessarily, only for the purpose of benefitting a few powerful individuals of the country. With Trump ending America’s longest war, nailing of the deep state’s coffin is in full-blown progress.

Read more: Biden can disturb the peace that Donald Trump brought to the Middle East

In fact, on Saturday, US Secretary of State Mike Pompeo met negotiators from both the Afghan government and the Taliban during his visit to Qatar’s capital, Doha. The meeting came almost immediately after it was revealed the US was going to pull out half of its presently stationed troops in Afghanistan. The US currently has around 5000 troops stationed in Afghanistan, and after the ambitious and fast-paced withdrawal espoused by President Trump is complete, roughly 2,500 will remain.

Such is the determination of President Trump to create history, that he only recently fired Defence Secretary Mark Esper over his reluctance to follow through with the expedited troop withdrawal plan. Esper was of the view that the Taliban had not followed the conditions laid down for an American withdrawal, an assertion which really is not far from the truth. While attacks on American forces seem to have stopped, targeting of civilians and Afghan forces by the Taliban continue unabated.

In the 21st century, particularly in a post-Covid world order, the Taliban and Afghan government fighting each other becomes an internal issue of the war-ravaged country, and need not necessarily require the active participation of the United States. The Afghan war, which was initiated post the 9/11 terror attacks has proven to be perhaps the most futile war fought by the US so far, and the same has not been given a miss by President Trump, which is why he is keen to rapidly withdraw American troops from Afghanistan. Trump’s keenness to put an end to the Afghan war is what upsets the stomach of his country’s deep state, which for long has benefitted with the constant circulation of arms required to fight America’s needlessly endless wars.

Read more: China and Pakistan have sinister plans in Afghanistan but India is making sure they stay out of the game

It must be remembered that Donald Trump was never a career politician. As such, he absolutely does not care for the opinions of those who harbour a typically cold war era mindset and freak out over the prospect of the United States withdrawing from a war without having achieved the purpose of installing its perceived version of a democracy in the host country. However, more than aiming to make a foreign policy legacy and name for himself, Donald Trump’s plan to withdraw a major bulk of American troops from Afghanistan immediately is majorly strategic too. Trump knows that it is now, or perhaps never.

For as long Trump is still President, the redeployment and calling back of American troops is in his hands. By calling back troops from Afghanistan, Trump can successfully end America’s longest war. Once troops are withdrawn, it would be a near impossibility for either Joe Biden, or successive Presidents to redeploy them, as they would then have to live with the fact that they initiated a war which America was completely withdrawing from. Such a suicidal move, no President would be willing to make. Therefore, Donald Trump will definitely be the one who will be remembered for putting an end to the Afghan war, much to the American deep state’s dismay.