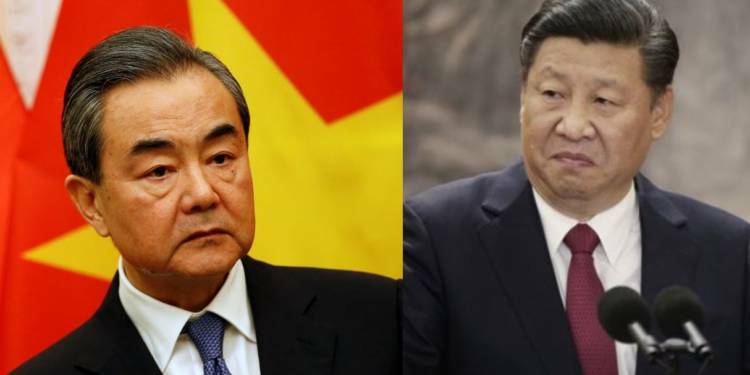 Jinping’s top diplomat Wang Yi, who was assigned to save China’s face across the world has become the face of China’s global embarrassment spree. He had to take burns for all the wrongdoing of CCP and to find some solace, he’s heading to Africa. But his African safari is also looking uncomfortable as the route of BRI there is filled with potholes.

The Chinese diplomats in every country of the world have been on the receiving end of criticism and scrutiny for quite a while now because of the involvement of the Chinese government in the spread of Wuhan origin Coronavirus on a global scale and it becoming a pandemic. The tally of confirmed cases is close to reaching Eight crores worldwide. The deliberate ‘mismanagement’ of the pandemic by the Chinese authorities is widely recognised as an attempt to hamper the world’s economic growth.

This activity undertaken by the Chinese authorities was claimed by the global experts to the first-ever case of bioterrorism that attacked humanity on a global scale. World’s biggest crime syndicate that is the Chinese communist party has been at the forefront of bringing instability to world peace and harmony. The dream of a peaceful China is now being regarded as a masquerade worn by Xi Jinping and the party, but since the Chinese attempt at playing a chameleon have long been exposed Wang Yi has no choice but to bow down his head in shame.

China’s racist, intolerant, and inhuman actions in the so-called Autonomous Region of Xinjiang against the poor Uyghur Muslims have now become the talk of global human rights organisations. There have been reports and verified instances of Uyghur genocides and hampering of human values in areas of Outer Mongolia and Tibet. The issue of suppressing the voices of revolutionaries by putting draconian laws in the Hongkong region brought flank to the Chinese authorities worldwide.

CCP’s attempts at grabbing the territories of other countries also contributed to the spread of hate against China globally. This clearly indicates that China is the single biggest threat to global peace and prosperity at the moment. It’s a popular joke that natural calamities like Earthquakes and Tsunamis are less harmful to humanity than China.

When Wang Yi visited European countries in September last year, he was welcomed with selected abuses and disrespect at an unprecedented scale. He faced flank for Chinese wrongdoings everywhere he went, be it Germany, where he had expected a warm welcome from Chancellor Merkel or the overall European Union which explicitly criticised China on the issues of Human Rights abuse, illegal laws in Hongkong, bullying its neighbours and the unfair trade practices.

The German Foreign Minister Heiko Maas had warned China of dire economic and policy consequences unless it realised its limits. He said this when Wang Yi was in the audience. Another embarrassing moment for China was when the speaker of the Czech Republic’s parliament visited Taiwan with an entourage and challenged China right in its face. China could do nothing but give useless and hollow warnings to him.

When Wang Yi visited Japan, he dearly wished if he could go back. The QUAD member under the leadership of the newly appointed Prime Minister grilled the Chinese Foreign Minister on the issue of illegal Chinese claims on the Japanese Senkaku Islands. Wang Yi had hoped for a respite from the heat of Europe visit by meeting with the new Prime Minister but he had no choice but to be on the receiving end of a furious PM Suga. He challenged China on the economic and war front and made the entire visit only about Senkaku much to Wang Yi’s embarrassment. Japan isn’t very happy with the way China has conducted itself. China’s coronavirus adventure caused the postponing of the Tokyo Olympic Games because of which Japan suffered a humongous loss of $6 billion.

Chinese companies have been known for taking unfair advantage of globalisation and by using their capitalistic socialism as a tool, they dream of bringing all the countries of the world down on their knees and using their cheap products as a remote control to move those countries at their will. Chinese companies like Huawei have been known to be the agents of the Chinese government and using the tech requirements of other countries for spying. The Chinese attempts of using former or current CCP members as mules who infiltrate the big corporations and countries of the world and then stealing their secrets for Beijing’s own gains got exposed explicitly.

This expansionist, irresponsible, and snobbish behaviour of Chinese diplomacy has received severe criticism and opposition from several countries. One major damage to China was turning the otherwise favourable and friendly countries like India, Australia, and Canada going all against China on every possible front. This practically isolated China leading to the creation of global anti-China fronts like the QUAD and the widening of the Indo-Pacific structure where countries like the United Kingdom, France, Germany, and the Netherlands will be patrolling to keep the Chinese actions in check.

The wolf warrior diplomacy which involves rude and uncivilised statements by the Chinese messengers has become the hallmark of a country that prides itself as among the oldest civilisation. This behaviour of CCP diplomats that intends to threaten all the other countries especially the smaller ones has brought irreversible damages to the Chinese plans of world domination through its flagship BRI which is nothing but a tool for its neo-colonialism.

The BRI is practically on the ventilator is counting its last breaths. Xi’s attempts to trap other countries into extensive debts are being recognised, highlighted, and flushed down the toilet. Since the Chinese purse is being emptied very fast, the BRI has become a pain in the rear end for Jinping. The countries which had initially shown interest in the project like Bangladesh, Malaysia and Myanmar, are asking the Chinese to take an exit. India’s neighbour the Maldives also realised the harms of China’s ‘help’ at the right time.

These countries are seeing what China did to Pakistan, Nepal, and Sri Lanka, where the inability to repay the loans resulted in land grabbing by Beijing. Even the countries in Africa, where Wang Yi is headed next, have shown their unwillingness to pay back the Chinese loans and as a result, China is trying to scale down its operations.

Wang Yi is headed to mend the ties in the light of reports surfacing about China’s policy of entrapping countries using debt as a tool. China’s visit to African countries first in the year has become the annual tradition for tightening the grip on African nations. But a hopeful Wang Yi will definitely be scared in Africa as the reality of China might come and bite him since the questions on real Chinese intentions persists.