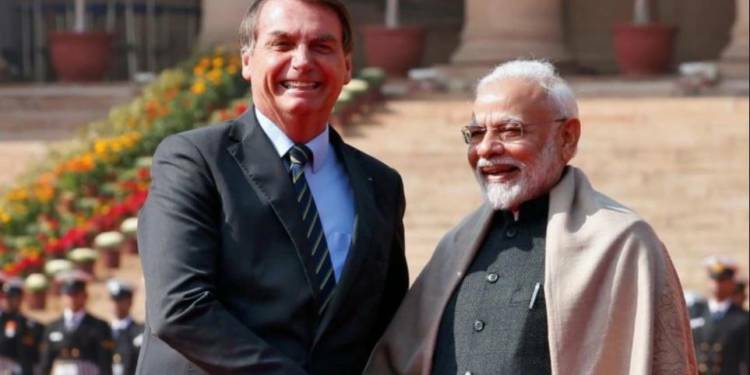 The coronavirus pandemic that originated over a year back in the wet markets of Wuhan or ostensibly the devious Chinese labs, has so far killed over a million people around the globe. However, it is India that is spearheading the campaign to restore normalcy in the world by supplying the coronavirus vaccine on a war-like scale. India’s indigenously developed vaccine, Covaxin, developed by Bharat Biotech is now heading towards the South American country of Brazil, starting with 5 million doses, to contain the spread of the virus, which is wreaking havoc in the country with its deadly second wave.

According to news reports, the Brazilian Association of Vaccine Clinics (ABCVAC), yesterday, confirmed on its website it had signed a Memorandum of Understanding (MoU) with Bharat Biotech to purchase its Covaxin vaccine, which is currently in the final stage of clinical trials.

“We had been looking for solutions for the private market, and the possibility came up of using this Indian vaccine, which is very promising,” ABCVAC president Geraldo Barbosa told TV network Globo News.

Any final deal would be subject to approval by Brazil’s health regulator, Anvisa, which is yet to approve any vaccine against the new coronavirus. However, given Brazil’s rejection of the Chinese vaccines, it looks a mere formality that the Indian variant of the vaccine would be fast-tracked and approved in a few days.

As reported by TFI earlier, Brazil’s health regulator had halted clinical trials of the Chinese coronavirus vaccine named CoronaVac after serious and adverse side effects of the vaccine started emerging. The dubious Chinese vaccine had stirred controversy in Brazil, where even President Jair Bolsonaro had cast doubt on its prospective effectiveness. Jair had publicly rejected CoronaVac, saying Brazilians would not be used as guinea pigs.

Xi Jinping had started injecting the untested vaccine as early as in the month of July last year and its efficacy was often questioned by the health experts with some going as far as saying that the Chinese authoritarian regime was using the ordinary Chinese folks as guinea pigs.

Similarly, the experiment in Brazil was done so in a haphazard manner so that China could mint money at a breakneck speed. The Chinese company Sinovac Biotech Ltd. that was developing the vaccine had even forced its Brazilian partners to withhold the release of complete data of the vaccine.

China is a master at fabricating numbers and data. Whether it be the economy, Covid-19 cases or now, vaccine efficacy, the paper dragon has historically fudged and continues to falsify numbers and data. By fudging data of its vaccine candidates, however, China is readily playing with human lives. As if killing millions of people across the globe wasn’t already enough, China is now seeking to cause harm to human civilization by inoculating people in poorer countries with highly unsafe vaccines.

The Indian government led by PM Narendra Modi has already given authorization to the Covaxin vaccine to be used for restricted emergency purposes. India plans to inoculate some 300 million people on a priority list by mid-year.

The faith shown by the Bolsonaro regime in the Indian vaccine is due to India’s proven track record and history in helping mankind overcomes such deadly diseases. The Modi government had helped the world by supplying the HCQ tablets and undertaking massive medical equipment supplies. And now it looks almost certain that New Delhi will bail out the entire planet from the Covid-19 catastrophe by supplying the vaccine. China and its treacherous vaccine diplomacy plans have been blown into smoke and Jinping must be having a hard time accepting the reality of the situation.