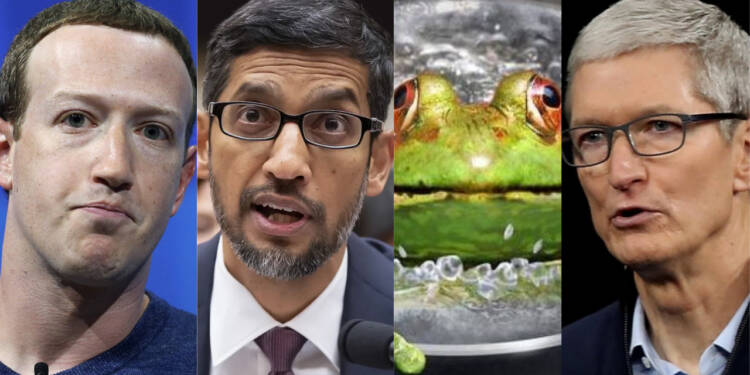 A frog, when put into boiling water, will immediately jump out, saving itself. However, a frog when first introduced to lukewarm water will adapt to its surroundings. With a gradual temperature rise, the frog will keep adapting. In fact, the frog will realise that it is about to die in boiling water only after it has lost its ability to jump. The frog will thus die adapting, till it loses its ability to save itself. Silicon Valley in California too adapted to a democrat-ruled and Left-infested ecosystem for far too long, and the same pandering to Leftists is now proving to be the death knell for big tech companies in the blue state.

Now, big tech companies and their owners are on the verge of losing fame, power and influence as the menace of motivated unionists come knocking at their doors. The tech industry capital on Monday was shocked to see a group of around 400 employees from Google and its parent company Alphabet announcing the formalisation of ‘Alphabet Workers’ Union’, dawning a new era of the potential employer-employee relationship in Silicon Valley. Big tech companies have for so long managed to avoid unionism from crawling up in its elite workforce, however, a handful of employees from Google and Alphabet have signalled with their announcement that the good old capitalist days are over. Employees of other companies meanwhile have already begun having their own ideas after Monday’s developments at Google.

Interestingly, a major chunk of those who have signed up for the Alphabet Workers’ Union is creamy-layered employees who enjoy all the perks of working at Google and its parent company, ranging from free food to expensive rides, not to mention palatial residences. The classic technique of the privileged employees bullying risk-ridden employers to embrace socialist practices has finally come into play in Silicon Valley, and California is on the verge of being doomed very soon if the Leftism of over-privileged employees is not nipped in the bud.

To be fair, some of the ‘aspirations’ of the Union are reasonable, including its promise of standing up against sexual assault, discrimination and abuse at workplaces. However, that’s the end of sanity right there. Apart from standing up against inhumanity in general, the Union has taken upon itself the job of ensuring the right to refuse projects that don’t align with the ‘values’ of the employees. Additionally, in a naked show of being bizarre, the Union is now striving for all workers in California, regardless of employment status, to enjoy the same benefits.

The band of engineers also hopes to herd Alphabet towards ‘making money without doing evil’, a proposition which indicates that the socialist hijack of big tech companies is much nearer than anticipated. Having based itself out of California, Silicon Valley is increasingly finding it difficult to survive in the blue state. Already, high business costs, growing living costs, exorbitant and overbearing environmental fee and steep taxes in the state have made life hell for tech companies. Now, they are also staring at the prospect of having their operations hijacked by rich socialists from among their employee base.

Those who made the Silicon Valley in California what it is today, are now being victimised by pompous employees who seem to have developed a guilty conscience for enjoying all the perks of working at Google and Alphabet, while many others continue to struggle for a living. Now that they have decided to bully employers as a means to rid themselves of such a conscience is indeed shameful, but the said employers had it coming their way for a very long time.

Silicon Valley patriarchs, for reasons best known to them, continued the practice of appeasing and pandering to the blue state’s rogue Leftists for years. Despite appeasing the Democrats, their companies are now being infiltrated and hijacked by neo-socialists who seek to ruin the already dilapidated business environment of California. Even while many companies are now shifting base to Texas, a Republican-stronghold, the menace of unionism will now be difficult for tech companies to evade.