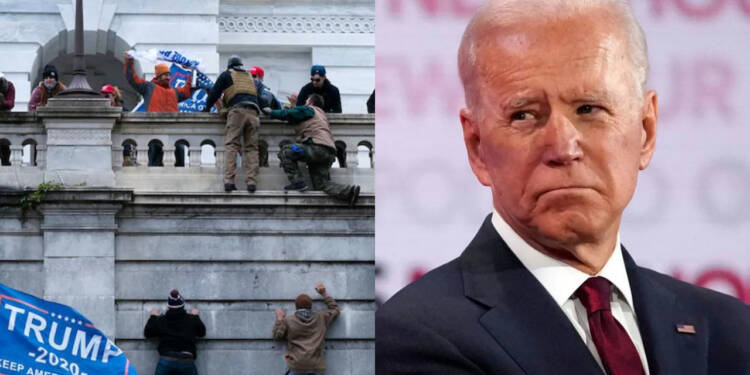 The United States of America — supposedly the most powerful country on the planet that prances around with the tag of ‘World’s oldest democracy’ with much pride, seemingly had a sordid ‘reality check moment’ yesterday. The Pro-Trump supporters marched towards Capitol Hill to protest against the certification of Joe Biden as the next President of the USA. However, what happened afterwards, especially with the liberals reacting to it and the pictures that circulated on the social media platforms will be a blot on the US democracy for years to come.

TFI is clear in its stance — violence, and destruction of any kind are not tolerable in any shape or form, whether it conforms to one’s ideology or not. However, the liberals of America, much alike the aping liberals of India have different definitions when it comes to protests undertaken by an ideology, at the opposite end of the spectrum.

This is the same Western world that gave the blasphemous definition of good terrorism and bad terrorism and quietly nestled in their burrows when countries like India called at the top of their voice that terrorism cannot be termed good or bad.

Similarly, good protests and bad protests have found their way into the 2021 dictionary already, courtesy, the left-liberals. According to Western liberals and politicians, it’s violence only when right-wingers do it. Black Lives Movement and ANTIFA were just cutesy street marches.

For some publications, the violent BLM protests were a means to bring social reforms but the march by the Trump supporters was a terrorist coup. Throwing the word ‘coup’ around rather foolishly and frivolously only depicts the intellectual ineptness in the entire left coterie.

Everyone in the right condemned what happened at Capitol Hill.

But everyone in the left justified rioting by ANTIFA, calling it anger of people fighting for their rights. Just like during anti-CAA protests. 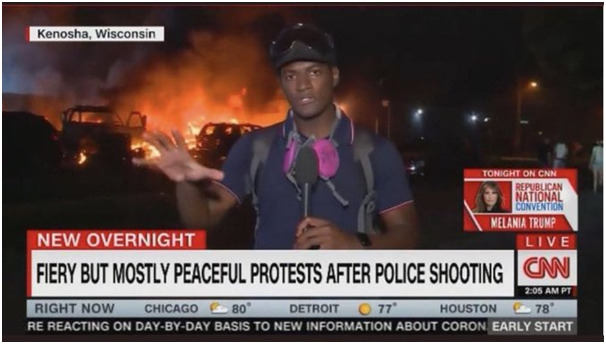 Congresswomen and the champion of left-liberals across America, AOC had remarked that the ‘whole point of protesting is to make people uncomfortable.’ And when the Pro-Trump supporters followed the exact blueprint laid down by her, they became fascists and terrorists.

The whole point of protesting is to make ppl uncomfortable.

To folks who complain protest demands make others uncomfortable… that’s the point.

The liberal cabal which called the protests and demonstrations the bedrock of a noble, civilised democracy, suddenly took a volt-face in their narrative and started hurling the choicest of abuses at the protestors who mere exercising their rights for the beliefs they believed in, to be true.

The same liberals who were playing down the protests and the mayhem caused by the dissidents during the BLM by calling it a ‘democratic expression’ are now batting on the front foot to dub those in the Capitol Hill compound as terrorists.

Another Congresswoman Rep. Pramila Jayapal, who had tweeted “Protest is patriotic. Protest is American. Love of country means you never stop fighting to make it better” when the violent BLM protests were raging across the states had a sudden epiphany after the events of last evening.

Protest is patriotic. Protest is American. Love of country means you never stop fighting to make it better. https://t.co/5X9Qvp7xR4

For Jayapal, the protests suddenly became an attack on the democracy of the nation and the protestors metamorphosed into terrorists.

Incited by Trump, these domestic terrorists not only launched a violent assault on our Capitol but on our democracy too.

They attacked America—all of us—and they must be held fully accountable.

Prosecute them. All of them.

Liberals crying hoarse over the breaching of Capitol Hill kept mum when during Brett Kavanaugh’s confirmation controversy barged into the Senate Building. Notice the lexicon –they were mere ‘protestors’ exercising their democratic rights. 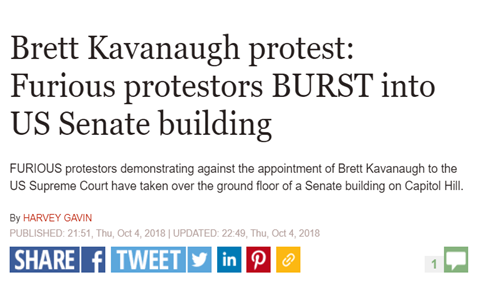 These are just a few examples in a sea of plenty but it is enough to depict the psychosis of the left and how its leaders use a different lens to gauge different demonstrations.

The Left-Liberal cabal and its sharpness in contriving the narrative according to its convenience is a lesson that should be taught in classes where examples of ‘Political Hypocrisy’ need to be enumerated.

Reported by TFI, violence had broken out in the streets of Washington DC in December last year when ANTIFA collided with peaceful protestors from the Trump faction who were agitating against Joe Biden’s alleged election victory that is currently being challenged by Trump in the Supreme Court. Several pro-Trump protestors were stabbed and injured by the ANTIFA members but neither Joe Biden nor Kamala Harris came out of the comfort of their homes to criticise the actions of the fascist group.

ANTIFA was the same organisation that had hijacked the protests triggered after the death of George Floyd in police custody. Cities across the United States had witnessed regular occurrences of riots and looting. The so-called anti-fascist group had engineered the anarchy that preceded the protests and it was one of the reasons why BLM lost some of its momenta.

Nobody in the ‘right’ is defending the actions of the protestors storming inside the Capitol Hill and their alleged acts of vandalism. But they are calling out the selective outrage. The mollycoddling of protestors when they suit the political agenda of the left is a trait that only liberals have nurtured amongst themselves. Yesterday’s events only strengthened the belief that liberals can go to any length to corroborate their narrative.

Their stance may not have the consistency of the right but they will defend it with every bit of resistance they can muster.