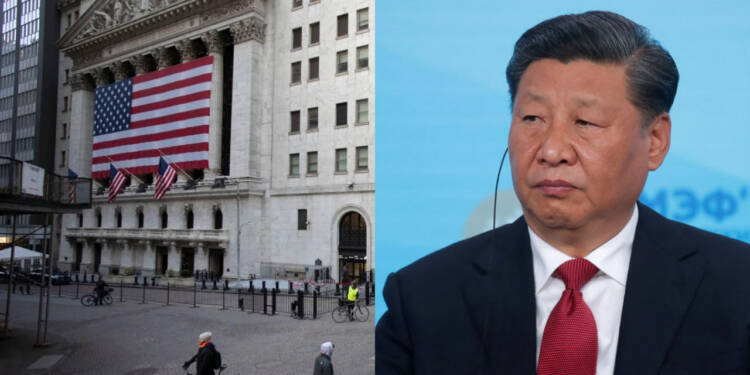 New York Stock Exchange (NYSE) of 11 Wall Street, after a couple of flip-flops and attempts to find ways out, has finally decided to delisted three of China’s telecommunication companies, which were the target of an executive order by President Donald Trump. Just before this, the stock exchange had said that they are withdrawing the decision to delist these companies, and would undertake further consultations with the regulators. This is the verbatim application of the phrase, back to square one.

The Wall Street big shots tried to manage the situation and play the devil’s advocate, by trying to go against the executive order by the President of United States, while sitting in and operating from the United States. However, the sudden U-turn and now immediately making the statement that the NYSE will go ahead with the de-listing means a lot. The fact that China’s influence structures and pressure tactics were countered within days, means that Washington DC is the place where the Chinese interest groups and the USA will fight it out going ahead.

According to statements from the NYSE, both reversals have been prompted by additional guidance given by the Treasury Department’s Office of Foreign Assets Control (OFAC). This means that China has been putting pressure on the Wall Street big shots to reverse the executive order and the fact that OFAC was involved, tells the depth of Chinese influence in the USA.

Shares in the Chinese telecoms: China Mobile, China Unicom Hong Kong and China Telecom were dragged along for the ride. The value of these shares plunged as much as 5% on Monday, regaining lost ground on Tuesday, and falling again Wednesday. As the NYSE has agreed with the executive order, the trading in the three companies in the U.S. will be halted as of Jan. 11.

The Chinese companies were using fraudulent means to gain initial ground in the NYSE as the Chinese banks and state at large were adding artificial profits to the new Chinese IPOs and it was these swollen IPOs which attracted investors, thus risking the whole stock market operations as well as the trust of the people in the Wall Street at large.

The Securities and Exchange Commission (SEC) requires all listed companies in the Wall Street to be registered with the Public Company Accounting Oversight Board or the PCAOB, which has to verify the accuracy of company audits. But China doesn’t play by the rules and more than 200 Chinese companies registered on American Stock Exchanges which account for $2 trillion haven’t adhered to this requirement. Beijing doesn’t allow PCAOB to examine the audit-books of listed Chinese companies. It claims that the audit-books are national secrets and cannot be shared with other parties.

Read more: Trump is ready with a $2 trillion jolt for China as a ruthless delisting of Chinese companies begins.

Now, the Holding Foreign Companies Accountable Act requires companies to certify that they are not under the control of a foreign government. More importantly, if the Public Company Accounting Oversight Board (PCAOB), an American watchdog, isn’t able to audit the accounts of a firm for three consecutive years, the company would stand de-listed from the American stock exchanges.

All this added up to the Trump administration deciding on passing an executive order and ending this Chinese facade, which could end up becoming a ticking time bomb for the US national security.

“For years, Treasury has led a rear-guard action to soften some of the harsher policies related to Chinese companies,” said Leland Miller, the CEO of the U.S.-based consultancy China Beige Book. “It is apparent this is continuing to happen. If it is true that someone at (Treasury) advised (NYSE) to reverse the decision to delist these Chinese companies, it was an outrageous effort to undermine (President Trump’s) Executive Order,” he tweeted.

However outrageous the effort may have been to reverse the executive order, it goes to say that China has been increasingly becoming effective in influencing the US foreign policy. It is also a wake-up call for the NYSE and Wall Street moguls that money may be everything, but it will only mean anything if the state that guarantees its value remains intact. And by kowtowing to the Chinese they are acting stupidly while perceiving themselves to be smart.