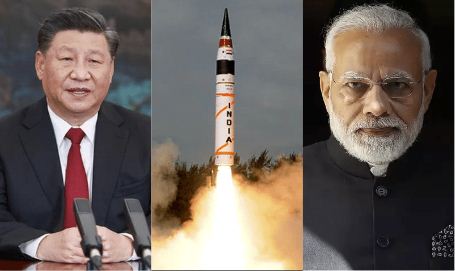 Chinese President Xi Jinping’s myopic belligerence has already woken up the Japanese Samurai in the Communist nation’s Northeastern frontier. And now, Xi’s misconceived military aggression is waking up a huge enemy in China’s Southern side. We are talking about India, which has fast-tracked the induction of a deadly long-range missile, Agni-V.

Xi is waking up enemies, who can really challenge Beijing’s military might and emerge as huge threats for China itself. Take the Agni-V, for example. India’s defence strategists had planned early induction of the long-range missile, but the process got fast-tracked only due to Chinese military belligerence.

Here is the real thing- barring the 1962 Sino-India war and the subsequent tussles that followed, New Delhi never really considered China an immediate threat. The strategic circles always kept the growing Chinese military might in mind but did not find the need to speed up deployment on the China front. Yet, Chinese belligerence has led to India bringing in a canisterised long-range missile with 5,000 km plus range.

Agni-V can target all major Chinese cities, including Beijing. In case of a military clash, India can now retaliate heavily against a Chinese nuclear attack. According to TNIE, a defence source said that the indigenously developed missile is presently undergoing pre-induction trials, and it would be finally deployed at strategic locations as selected by the armed forces.

Agni-V is just the kind of missile that China would hate to see poiniting towards its territory. Its canisterised character offers necessary operational flexibility to the armed forces. A canisterised missile remains in a state of readiness and can be rapidly launched in face of an imminent threat.

Also, Agni-V is carried by a road-mobile launcher, which means it can be transported throughout the country in response to external threats that have to be deterred. The increased manoeuvrability also makes it very difficult for the enemy to launch pre-emptive strikes and neutralise Agni-V.

There are actually several such programmes that the Defence Research and Development Organisation- India’s premier military research organisation has initiated only in order to tackle Chinese aggression. It is developing GHATAK- a stealth flying wing combat drone for the Indian Air Force (IAF). Once developed, GHATAK will emerge as a next-gen unmanned strike bomber that can breach Chinese air defences with its stealth technology and execute reconnaissance or even bombing operations on enemey soil.

Last year, an upgraded version of the DRDO-developed Pinaka rocket was also tested by India. Pinaka is India’s battle-tested, indigenous Multi-barrel Rocket Launch (MBRL) system. It has proven reliable in high altitude warfare and in clash of a Sino-India military clash, Pinaka can easily pulverise Chinese deployments at strategic heights.

And the DRDO is also moving towards next-gen hypersonic missile technology. These future weapons travel faster than five times the speed of sound, fly at low altitudes and remain highly manoeuvrable, making it hard for missile defence systems to intercept them.

On China’s North, Japan is developing pilotless fighter aircraft and long-range missile systems that can hit strategic Chinese targets at will. India and Japan are, either knowingly or unknowingly, forming a formidable two-front situation against China.

Xi has woken up two lethal and brave enemies on China’s borders. As such, the Chinese military will find it hard to meet the threats being posed by New Delhi and Tokyo. Xi’s short-sightedness is going to prove very expensive for China, as Beijing will now have to spend huge amounts of money only to meet the military readiness being displayed by two of China’s biggest enemies.