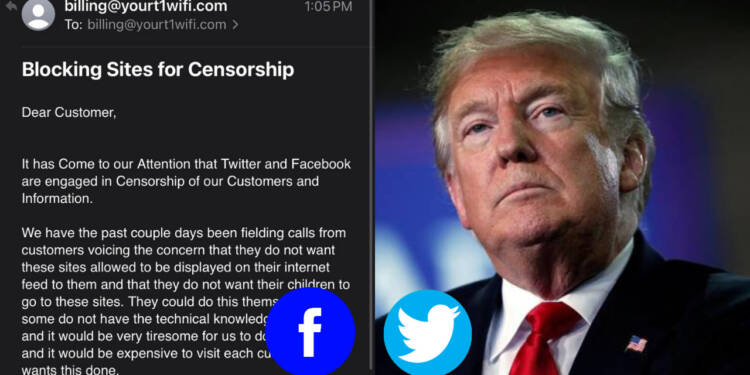 ‘Your T1 WIFI’ –  an Internet Service Provider Company based in Idaho, USA has banned Facebook and Twitter from its services after the social media platforms unilaterally banned the accounts of American President Donald Trump. The company said it received several calls and e-mails from customers about both websites regarding censorship and following the complaints decided to blacklist Facebook and Twitter.

“It has come to our attention that Twitter and Facebook are engaged in censorship of our customers and information,” read the ISP’s email to its customers which further added “Our company does not believe a website or social networking site has the authority to censor what you see and post and hide information from you, stop you from seeing what your friends and family are posting. This is why with the amount of concerns, we have made this decision to block these two websites from being accessed from our network.”

In the emails, the company also wrote that their contract and acceptable use policy allows them to block websites if they deem the content “break any rules (sic) or illegal or harmful to our customers and more.”

The Idaho-based company has set an example for other ISP’s to follow as the big tech companies have become increasingly partisan. Reported by TFI, the government of Uganda on Tuesday banned all social media apps and platforms in the country, including Facebook, Twitter, and WhatsApp citing gross interference of such platforms in the country’s democratic process.

Uganda has effectively become one of the very first countries to come cracking down hard on American big tech social media companies like Facebook and Twitter for their blatant bias not just in the United States, but across the world.

Reported yesterday by TFI, social media giants like Instagram, and Facebook have openly admitted they are not neutral and that the platforms have an inherent left-wing bias.

“We’re not neutral. No platform is neutral, we all have values and those values influence the decisions we make. We try and be apolitical, but that’s increasingly difficult, particularly in the US where people are more and more polarized.” said Adam Mosseri, head of Instagram.

This feels like the kind of move that Facebook could have made 5+ years ago if it hadn't been so intent at the time on portraying itself as a neutral platform and promoting online connection as an absolute good. https://t.co/iAFmjwv0ph

After the incidents at Capitol Hill last week, the Silicon Valley social media platforms like Facebook, Twitter and Instagram have come out with their holier than thou attitude by banning Trump to proclaim themselves as some righteous platforms that believe in the good of the world.

By banning an outgoing President who is at the wane of his powers, the social media platforms Facebook and Twitter are trying to showcase themselves as the good Samaritans. However, the truth is that these platforms openly fleeced the popularity and ability of Trump to churn a controversy to their benefit. And when Trump ceased to serve any purpose, these platforms dumped him like a sack of potatoes.

Just to give a little perspective, Twitter took down Trump’s handle, even though it was the most popular politician handle on the platform. In doing so, Twitter literally silenced opposition against the Democrats in a single stroke. Freedom of Speech and all other Nobel liberal virtues were instantly thrown down the drain by Jack Dorsey and his coterie without any second thoughts.

Whether ‘Your T1 WIFI’ is in violation of Washington state’s Net Neutrality law or not is a discussion that can be tabled for later but for the moment, the company has shown that if such small enterprises can show the guts to fight the ‘sinister silicon six’ then it is indeed possible to keep them in check if foreign governments show even an iota of authority.