Has Angela Merkel received kickbacks from China to get the Sino-European investment deal done? 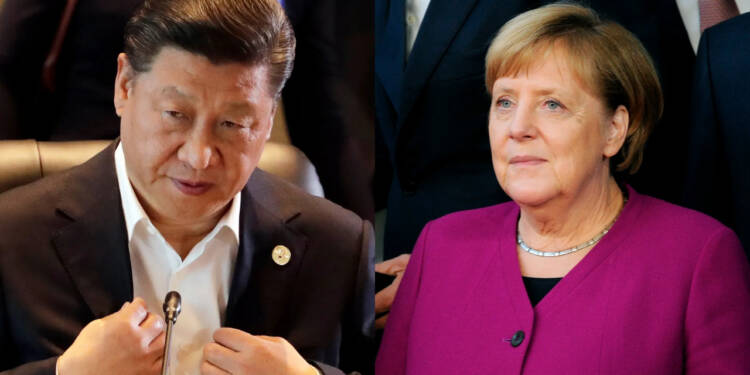 China and Europe finally decided to sign an investment agreement, last December which was under deliberation for the last seven years. This investment agreement will allow EU and Chinese companies to have more access to each other’s markets, as well as easier rules to invest. France and some Eastern European countries were against this agreement. France issued a statement just two days before the agreement saying, “France has a strong objection to the bonded labour released in China. If no solution is included in this problem in the investment agreement, we will veto this deal.” However, after that, it is believed that based on the increasing pressure from Merkel and the promises of China, France also decided to finally give it a green signal!

If anyone has played the biggest role in ensuring the agreement between the EU and China, it is Germany and its Chancellor Angela Merkel. Germany is not only the most influential member of the EU, but also has a very close relationship with China. This agreement was extremely important for the Chinese, and even the Financial Times had to write in one of its articles that through by doing this agreement, the EU handed over a strategic victory to the paper dragon.

Read more: Angela Merkel is trying to project herself as a global leader but ending up as a pawn in the hands of Xi Jinping.

After the deal was confirmed, Germany itself came under the target of several EU member states. According to a report by Politico, countries like Italy, Poland, Belgium and Spain accused Germany of ignoring their interests and confirmed the deal, at a time when Merkel is about to reach the end of her tenure. Here the question arises that why was Merkel adamant on making this deal firm?

It has now been revealed that Germany was offered some special advantages by China to ensure this deal. According to a report by the German portal Wiwo, there is a high possibility that German company Deutsche Telekom can get the license to manufacture mobile phones in China. It may become the first non-Chinese company in the world to get this opportunity in China.

According to this German-language report by @wiwo (paywalled) Germany seems to have been offered a side deal for Deutsche Telekom as a reward for German Chancellor Merkel’s unequivocal support for the EU-China Comprehensive Agreement on Investment #CAI /1https://t.co/a5JpoopUlU

Deutsche Telekom is Europe’s largest telecom provider and is already providing services like data centre and cloud store in China. According to a report from September 2020, Germany is working on a deal to make the Deutsche Telekom company more accessible in China, in-return of making its 5G policy China-friendly. Now according to Wiwo‘s report, China can give a big gift to the Merkel administration by giving more access to this company in return for the EU-China deal.

From the beginning, Merkel has been avoiding a strict attitude towards China. From not criticising China after Corona to now playing a major role in the EU-China deal, Germany’s China-love is not hidden from anyone. It has now come to light that Germany has acted against the interests of all EU member states for its interests and gave China a major victory at a sensitive time.

All this was done when the EU and Germany were already under pressure from the US and Team Biden not to do this deal. Merkel wants to retain her place in China’s good-books even at the end of her tenure. She has already taken steps against banning Huawei altogether. To serve her personal interests, Merkel is bent on making Europe a puppet in China’s hands. And with this, she has shrouded her legacy with the worst possible shame, of serving the EU on a silver platter to the Chinese, basically selling the continent, while pretending to be its leader.