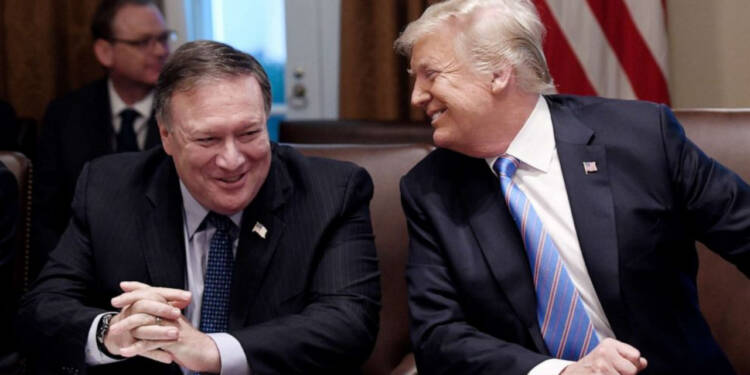 With the Biden administration getting ready to enter the office, and the Trump administrations’ members exiting the Secretary of State Mike Pompeo, his legacy is what makes him the best bet for leading the USA and the Republicans. All his actions have synchronised will with the Foreign Policy outlook of US President Donald Trump and by being his envoy all over the world. Mike Pompeo has made the US foreign policy, under Trump, the most successful in recent decades.

In a tweet, he said that serving the US citizens was an honour of a lifetime. And with this tweet, he has made a graceful exit from his responsibility of Secretary of State. His tenure was one of the most active, sustained and successful tenures as the Secretary of State and going ahead with his candidature as the US President after Trump from Republicans would be the best bet for the USA as a nation.

Pompeo has frequently been spoken as a potential Republican presidential candidate after Donald Trump, and it is because if his sheer clarity of American interests, as well as, his farsightedness. Even before leaving office, Mike Pompeo has been true to his duty by imposing sanctions on three of his primary targets — China, Iran and Cuba — in a last-minute push to further the American interests and deny these countries even a week to succeed in creating hurdles for the USA.

Mike Pompeo has been the most direct in his speech and does not mince words when addressing friends and enemies alike. He just recently mentioned in a tweet, “Uyghur women are not “emancipated” by forced abortions and sterilisations,” in a counter to the Chinese Embassy’s laughable tweet of China promoting gender equality and reproductive health.

Uyghur women are not "emancipated" by forced abortions and sterilizations. pic.twitter.com/BZPEnUn6bq

This is the kind of clear-minded and non-politically correct but factually correct statements one expects from a President of the USA. It is during his time in the office of Secretary of State that Indo-Pacific became a reality, the Abraham Accord, which was not imaginable could come into physical existence and it was his frequent and consistent bilateral and multilateral, that the USA was able to regain its alliance structures which were loosening since the time of the Obama.

Going easy on enemies and making deals with the enemy are both ways to betray friends, and in this manner, Obama administration not only empowered its enemies, but it complicated the security dynamics for its allies too, thus, making its allies moving away from the USA.

However, since the arrival of Mike Pompeo as the man for Donald Trump’s Secretary of State, he has entirely flipped this dynamic and which is why the allies have regained confidence in the alliance system with the USA, with the USA gaining further allies, like India. In one of his tweets, just before leaving office, this idea comes out clearly. The tweet went, “Good diplomacy means setting clear expectations of friends and enemies alike. All we’re asking is for Iran to behave like a normal nation.”

Mike Pompeo has been the biggest challenge for the worst enemies of the USA in the 21st century, namely China and Iran. He, together with Donald Trump, has been continuously charging a blistering attack on the Iranians and the Chinese with the coupled force of sanctions and alliances.

While President Trump has been signing executive orders to sanction China and Iran, Mike Pompeo has been on a blitzkrieg of international meetings with nations which are either at odds with China or are finding it hard to counter Chinese influence. The political climate in the US was more charged up than ever as Secretary of State Pompeo embarked upon a surprise seven-nation tour of the US allies, despite the liberal media trying to force the Trump administration into handing the keys of the White House to Democrats and Joe Biden.

As a result, the entire Trump administration is still working round the clock and going about its business as usual and Mike Pompeo has been at the heart of these operations. Pompeo travelled on November 13 when he left for Paris, where he met his French counterpart and President Emmanuel Macron of France to build on their transatlantic work on economic and security matters, and counterterrorism and global threats. From there, the US Secretary of State headed to Istanbul and the former Soviet Republic of Georgia before arriving in Jerusalem along with three essential Gulf Arab allies – Saudi Arabia, the United Arab Emirates (UAE), and Qatar.

Read more: With a surprise foreign tour, Mike Pompeo is just getting started and the ordeal for China is not over.

It was only one of the many similar exercises that the Secretary of State had undertaken throughout the Trump Administration. To understand the impact of Mike Pompeo in his position, we can scale it based on the fact that Chinese dispensation has espoused most hate on Mike Pompeo, after Donald Trump, as he has time and again dismantled long-planned and highly financed attempts by China to gain influence in different regions.

Moreover, the Republicans will look for a viable option for becoming the US President after Donald Trump. There cannot be an any better option than that of Mike Pompeo, who is not ashamed of putting America first, and interests of those allies first who reciprocate their alliance with hard action rather than being ungrateful for receiving support both monetary and political support from the USA. He is the person who can keep the designs of a rising China in check while keeping the allies together. This is why he will be the best bet for the position of US President after Trump, going ahead.