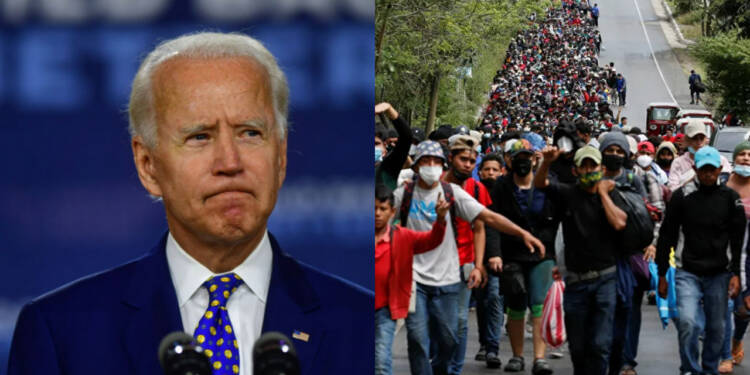 A caravan of thousands of immigrants allegedly is travelling from Honduras to the United States, asking the incoming Biden administration to “honour its commitments,” apparently referring, according to media reports, to the President-elect’s promises to undo much of Trump’s immigration policies.

The caravan has traversed Guatemala’s border, estimated by officials to be about 9,000 Honduran migrants, and is performing what the Guatemalan Government considers to be a breach of their national sovereignty.

The caravan has expected the Biden administration to welcome them warmer than the outgoing government, according to a statement from Pueblo Sin Fronteras [People Without Borders], as quoted by Fox News.

“We recognize the importance of the incoming Government of the United States having shown a strong commitment to migrants and asylum seekers, which presents an opportunity for the governments of Mexico and Central America to develop policies and a migration management that respect and promote the human rights of the population in mobility,” the group stated. “We will advocate that the Biden government honours its commitments.”

Fleeing poverty, gang warfare and the recent weather disasters in Honduras, the majority of immigrated persons, many on foot, intending to cross Mexico, before reaching the United States.

40-year-old Agustina Rodriguez told reporters, “I have come on foot, without money, suffering,” cited by AFP. “Thank God we are already here in Guatemala — now on (to the United States).”

US President-elect Joe Biden has announced that he would end Trump’s immigration cabinet policies, stop extended detention and unite separated family migrants due to Trump’s policies in the United States, stop funding for the increased construction of a wall on the US-Mexico border, and restore Obama-era immigration policies.

Biden had also promised to establish an “a fair and humane immigration system,” which would help fix the causes of immigration from Latin American countries to the United States.

In response to news on the migrant caravan, Commissioner Mark Morgan, Acting Customs and Border Protection (CBP), condemned the rhetoric of Trump’s Migrant Policy from the incoming government.

“We’re looking at two groups that are well over five thousand. And one of those groups has already gotten through the Guatemala border. And they’re on their way to El Rancho, which is about the located centrally in Guatemala,” the Trump appointee declared on Fox & Friends on Saturday, “It’s coming. It’s already started, just as we promised and anticipated it would with this rhetoric from the new administration on the border.”

The perception was previously reinforced by Trump, suggesting that if his strategy against immigrants was changed there would be “a tidal wave of illegal immigration.”

If our border security measures are reversed, it will trigger a tidal wave of illegal immigration, a wave-like you’d never seen before,” Trump said on Tuesday, uttering the words in front of the US-Mexican border wall in Texas. “I can tell that already waves are starting to come up from 2,000 and 1,000 and 500 miles away,” the outgoing President Trump had warned earlier.

Unlike Biden, the issue of illegal migrant caravans has previously been discussed by Trump, who hardened US immigration policy and sought to end the Obama-era ‘Dreamers’ initiative that permitted illegal immigrant children to stay in the country until they were 21.

Biden’s obsession to overturn Trump’s policies is going to cost him and the US government a lot of taxpayer’s money. Moreover, Trump’s policies on immigration and foreign affairs have been radical but have also helped the United States to address the key issue of illegal immigration.

Therefore, to hastily take decisions based on idiotic stands of ideology will prove costly to Biden’s ill-gained popularity and the people of the United States. The horde of immigrants has already started its journey to cross into the borders of the United States, a border which Trump had made more secure and unrelenting. Illegal immigration is an issue which the Biden administration would have to deal with more rigidly or riots will let loose in the cities.