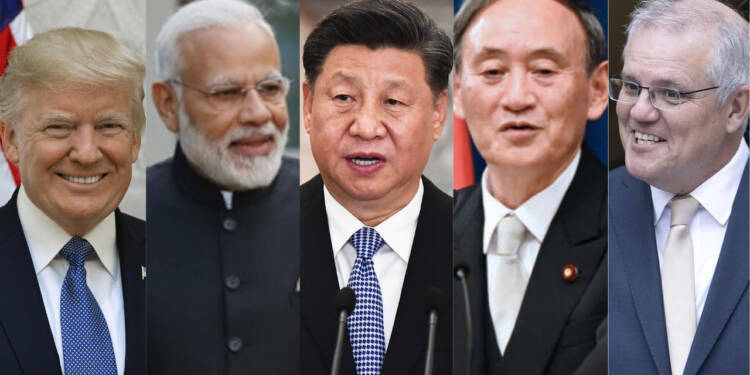 China has agreed to construct a road linking the 800-kilometre-long Karakoram Highway to Gilgit Baltistan, occupied by Astore in Pakistan, signalling Beijing and Islamabad’s intention to increase pressure at the Indian border. Whilst matching the initial strategic advantage of Chinese deployments by taking the Kailasha Range on the south of Pangong Tso lake on 29 August, it is clear that India is preparing to riposte, not in the Himalayas, but the Indio-Pacific waters, collaborating with its fellow Quad allies.

According to news reports, China wants to connect Astore via the Karakoram road to Yarkand, the former Buddhist spring and later a place of importance for the ethnic Uyghur community. After the 33-meter-wide road has been built, China can channel heavy artillery into Gilgit Baltistan and threaten the location of India in Ladakh.

India has crossed major steps in collaboration with its fellow Quad allies Japan and the United States, hitting China where it hurts the most along vital shipping routes used by Chinese commercial ships passing the Andaman and Nicobar Islands.

India silently connected the Andaman and Nicobar Islands with the chain of undersea fish hooks previously marshalled to track Chinese ship and submarine movements in the Pacific by Japan and the United States. These are a string of 572 islands that extend over 800 kilometres north-south at the west entrance of Malacca Strait and one of the world’s most important naval and trading chokepoints.

The much-speculated US-Japan “fish-hook” SOSUS (sound surveillance sensor chain) has now been obtained from the Andaman-Nicobar Islands, building a counter-wall against the Chinese submarines loitering in the Andaman Sea and the deep South China Sea.

SOSUS is a sonar system developed as the American Navy sought a solution to combat submarine warfare. In 1951, the USA tested its first set of hydrophones to deter Soviet submarines to destroy soviet submarines. But now the older one has been replaced by a more sophisticated SOSUS, also called a fish-hook, to track the PLAN’s ships and submarines.

This level of engagement with the United States and Japan will be more crucial as hostility towards the Chinese aggression in the international arena increases. Moreover, Japan’s decision to transmogrify its state secret laws to share intelligence with the UK, India, and Australia is the icing on the cake.

In November, maritime exercises were conducted by Quad countries and a message to China was intended. Observers reported that the participants hoped that through the exercises, they would counterweigh the growing political and military presence of Beijing in the region. Operations have now grown as knowledge and technical skills are exchanged to prevent the growing animosity in China.

Quad members Japan and the United States pledged their support during the current rift between India and China and supported India to fight Chinese aggression along its land and water borders.

The Quad’s support to its members is beginning to bear fruit. Enhanced solidarity and morale in the military sector would open up further areas of collaboration. For example, in the economic sphere, which requires urgent attention given the enormous diversification of the supply chain that needs to be pursued to minimise their reliance on China.