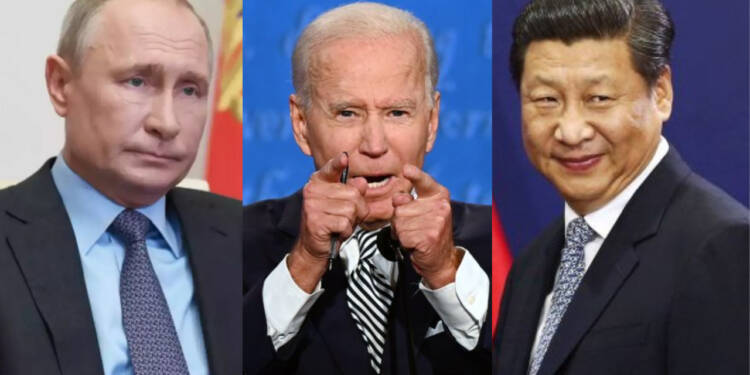 As Biden prepares to take office, the left has cooked up the perfect conspiracy theory to shift the narrative from China being the bully of the world to now setting the narrative back to Russia being the biggest threat to the world and the US. Biden would have anyway tried to slowly shift the world’s attention away from China and towards Russia, but the Capitol Hill breach has given him the perfect opportunity to shift the focus from China to Russia when it comes to declaring which country is the number one enemy of the US.

U.S. House Speaker Nancy Pelosi called the security breach at the Capitol “the biggest gift to Putin” from President Donald Trump. Glee from pro-Putin commentators in Moscow would seem to bear out that opinion, echoed by many U.S. Democrats. While the Democrats could have made a similar analogy with the Chinese, it would be counterintuitive for them as the Democrats on many levels are in cahoots with the Chinese Communist Party. Thus, with the terming of the attacks on Capitol Hill as a gift to Russia and Putin from Donald Trump, Nancy Pelosi and Democrats like Biden are setting the ground for a policy shift in the US foreign policy, going ahead.

Now an intelligence report, which is being circulated is giving tooth to the argument. It says that Russian military intelligence-linked militant groups may have participated in the Capitol Hill security breach.

As per a report by IGTDS, their analysis of photos and videos from open sources shows that Russian military intelligence that may be involved in a large-scale cyber-attack on US federal agencies, intervened in the recent events in Washington DC. The report is more absurd than they make it sound to be.

Read more: ‘No jobs for you,’ American leftists are launching apartheid on Trump supporters.

At a time when all the videos tell a similar tale that it was a bunch of short-sighted and foolish people who went into the Capitol, the report compares the actions of the rioting mobs with the crowds around the world where, as per them, Russia was the instigator. They fail to acknowledge John Sullivan who is accused of provoking violence at the Capitol. According to New York Post, he founded Insurgence USA, a protest group for “racial justice and police reform,” and began referring to himself as “Activist John” — filling his Twitter feeds with anti-President Trump rhetoric and posts supporting Black Lives Matter. Somehow this man embedded himself in the pro-Trump protests.

TFI has already reported on the compromised situation the big media companies in the USA are currently in. As they get most of their funding from the Chinese Communist Party, one way or another and as they have been supporting the Democrats for long, it does not take much time to connect the dots. From the looks of it, Biden administration is going to give its first gift to the Chinese, as it will shift the USA’s rage away from China to Russia.