Big Tech Vs Gab, Epic and Parler – The Social Media game just got heated up 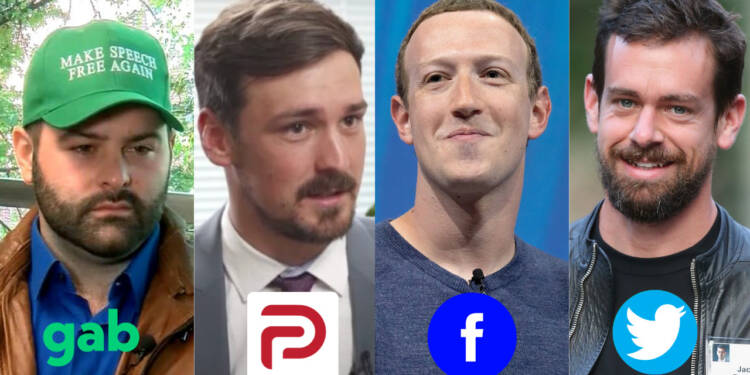 The Big Tech including the Twitters, Facebooks and Amazons of the world had thought that they had taken out all the right-wing voices as they de-platformed many users, the President of the United States of America and even went as far as arbitrarily taking down Parler. However, with the situation turning miserable, a sudden message from Parler’s website has signalled that the social media game has just heated up. Parler’s website suddenly appeared online on Jan. 17 with a message from its CEO, John Matze, who said, “Hello world, is this thing on?” The website only included the message.

The first thing that comes into mind is that Parler has found a service provider to recover its hosting and get back online with the whole world. While the Amazon Web Services had taken down the website from its servers and Google took down its app from Play Store to showcase to the new overlords in White House, that they were their loyal lapdogs. These companies have slowly but steadily found their way back on the internet, as multiple companies are comping together to counter Big Tech’s social media monopoly.

As reported by The Epoch Times, according to a WHOIS search, social media platform Parler appears to be hosted by Epik, which also hosts social media website Gab. This is very good news for all the advocates and supporters of free speech. Earlier AWS had taken down Parler, as it was being seen as a “free speech” platform. And as a result, was making an unprecedented surge in users as prominent conservatives, among others, were being banned from Twitter, Facebook, and other social media platforms. Particularly after the Presidential Polls marred by allegations of voter fraud, Parler’s daily downloads went as high as 340,000 in mid-November.

Read more: Twitter’s alternative Parler was growing fast. Then Big Tech went after it and now its CEO has gone into hiding.

Parler CEO John Matze also issued a temporary status update.“Now seems like the right time to remind you all—both lovers and haters—why we started this platform,” Matze wrote. “We believe privacy is paramount and free speech essential, especially on social media. Our aim has always been to provide a nonpartisan public square where individuals can enjoy and exercise their rights to both. We will resolve any challenge before us and plan to welcome all of you back soon. We will not let civil discourse perish!”

Epik has given a platform to Parler so that it can get back online. It is the same company which provides hosting to Gab, which is another platform formed in 2016 as an alternative to Twitter and Facebook. The platform thus provides a voice to many who have been de-platformed from social media giants.

In a statement last week, Epik lambasted these social media giants’ “kneejerk reaction” of “simply de-platforming and terminating any relationship that on the surface looks problematic or controversial.” The statement noted that Epik is “not quick to abandon our administrative positions,” as it attempted to contrast itself and Amazon.

In this world of mega social media giants, this possible challenge by the small companies coming together and providing an alternative which very well are the only places where free speech, is considered holy. This is turning out to be the David vs Goliath battle of 21st century and with the resurfacing of Parler, the Social Media game has just got heated up.

$315M raised, another $1.2B in the offing: Chinese companies are very bullish on the US market as Biden era is about to start