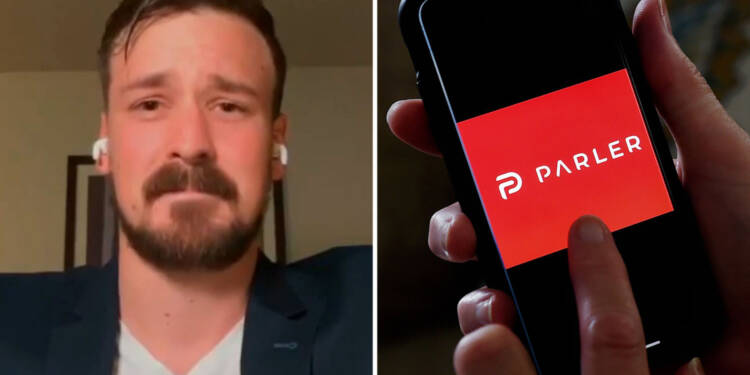 In an undemocratic turn of events, Parler CEO John Matze Jr. and his family have been forced to go into hiding, after they reportedly received multiple threats, including ones to their life. Having been bombarded with death threats, the family continues to be in hiding, days after John Matze’s app – Parler got blocked by Apple and Google stores, apart from getting blacked out by Amazon Web Services last week. Having been virtually shut down by rivals, Parler’s staff including their families has also been subjected to a spate of death threats, particularly after the Capitol Hill breach of January 6.

Parler grew astronomically as a medium for right-wing voices in America to freely air their views. Particularly after the Presidential Polls marred by allegations of voter fraud, Parler’s daily downloads went as high as 340,000 in mid-November. This, because Trump’s supporters, Republicans and conservatives felt increasingly frustrated with the stifling of their voices on platforms like Facebook, Twitter and Instagram. However, after Donald Trump was silenced by Twitter, right-wing voices shifted to Parler and the social media platform was growing at an exponential rate. This was when Big Tech villains, Google and Amazon pulled the plug on the platform.

For the Parler CEO and his family to be forced into hiding in the freest country of the world bears testament to the horrific state the USA is in. Imagine this – John Matze Jr. and his family, apart from the entire workforce of Parler are being threatened only because they worked to give all Americans a platform where they could air-free views without fear. In a lawsuit filed by Parler against Amazon, Matze’s legal team alleged, “Matze had to go into hiding with his family after receiving death threats and invasive personal security breaches.”

The anti-trust lawsuit filed by Parler against Amazon and its web services also said, “Many Parler employees are suffering harassment and hostility, fear for their safety and that of their families, and in some cases have fled their home state to escape persecution.” This shows the levels of vindictiveness American big tech companies have descended to. In their desperation to kill all competition that threatens to challenge their hegemony, companies like Google, Amazon and Apple are specifically targeting Parler, and also standing as mute spectators to the brazen harassment of the latter’s employees. Whether the big tech is also involved in the harassment directly or indirectly will only be ascertained in the coming days.

Parler was proving to be an existential threat for social media platforms like Facebook, Twitter and Instagram. The biases of such platforms, rest assured, are known to all. Hence, when Parler began storming to popularity in the United States, big tech companies waged a concerted war against it – leading to it now being blacked out, at least temporarily.

Daily active users on Parler shot up from about 500,000 on Oct. 25 to a peak of about 2.9 million in late November, and have stabilised since. Such figures obviously rattled the digital hegemons of the world, who now seem to have forced the Parler CEO and his innocent family into hiding. However, the world community has not given a miss to the strongarming tactics being employed by big tech and Democrats against American conservatives.

Read more: After India and Australia, now Turkey, Germany and France look to rein in the Big Tech after what they did to Donald Trump

Earlier, TFI had reported how Indian lawmakers spoke up against what big tech did to the US President. Then, Australian ministers also started questioning the double standards of social media corporates. Germany and France have opposed social media bans and restrictions against Trump by no less than speaking to the same effect. Turkey, meanwhile, has launched a probe into Facebook and WhatsApp. And then, Uganda became the very first country to effectively block all American social media, allegedly for interfering in the country’s democratic processes. Most recently, Poland has started chalking out a draft law that will stop social media companies from censoring posts and deleting accounts if they do not violate any Polish laws.

An international backlash against American big tech is the only way to rein in rogue Silicon Valley giants, who seem to think they have a monopoly over the global digital space.