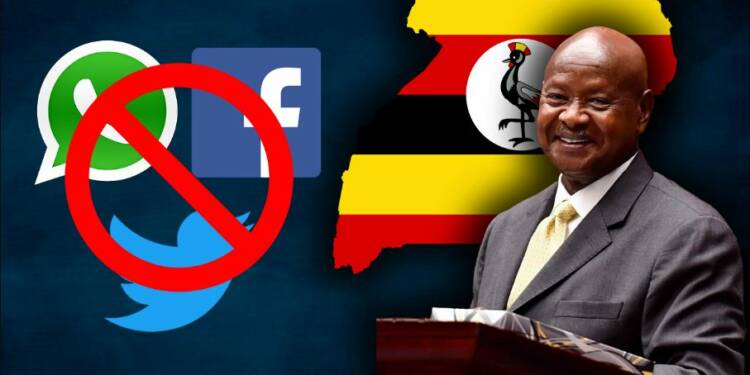 The government of Uganda Tuesday banned all social media apps and platforms in the country, including Facebook, Twitter and WhatsApp citing the gross interference of such platforms in the country’s democratic process. Elections in Uganda are slated for January 14, that is Thursday, in which incumbent President Yoweri Museveni faces off Bobi Wine. The Museveni-led government has alleged that Twitter and other social media platforms are indulging in blatantly biased behaviour and banning pro-NRM handles. The ruling National Resistance Movement (NRM) party is currently incumbent in Uganda, led by President Yoweri Museveni.

Uganda has effectively become one of the very first countries to come cracking down hard on American big tech companies for their blatant bias not just in the United States, but across the world. What is increasingly being seen is that big tech platforms like Twitter are taking it upon themselves to decide what is good and bad for various countries, usurping the rights of the citizens of such countries. Having their biases at place, such platforms then take to banning any individual who appears to have a contrarian viewpoint.

Take for instance what Twitter did to U.S. President Donald Trump, who was suspended permanently from the platform without much cause. Twitter had then taken to moral grandstanding, projecting themselves as the saviours of American democracy. Yet, now that Twitter has been given a taste of its own medicine by the Ugandan government, it is crying foul.

Read more: Twitter sent a rogue message when it silenced the US President. Now Indian lawmakers are all set to teach it a tough lesson

Taking to their own platform, Twitter’s Public Policy handle remarked, “We strongly condemn internet shutdowns – they are hugely harmful, violate basic human rights and the principles of the open internet…Access to information and freedom of expression, including the public conversation on Twitter, is never more important than during democratic processes, particularly elections.”

Earlier this week, in close coordination with our peers, we suspended a number of accounts targeting the election in Uganda.

If we can attribute any of this activity to state-backed actors, we will disclose to our archive of information operations:https://t.co/GB71n4avwm

It is hilariously ironic how Twitter is extolling the virtues of public conversations on the internet when it itself has been working overtime to stifle the same. For a platform which only days ago banned the sitting U.S. President, crying foul over being given a similar treatment by the government of Uganda is a bit rich. The Ugandan government, meanwhile, has claimed that platforms like Twitter were indulging in electoral interference, including blocking pro-government accounts.

@KagutaMuseveni : Uganda is ours, it's not anybody's pic.twitter.com/7QQYjku4Ke

Earlier, TFI had reported how Indian lawmakers spoke up against what the big tech did to the US President. Then, Australian ministers also started questioning the double standards of social media corporates. Germany and France have opposed social media bans and restrictions against Trump by no less than speaking to the same effect. Turkey, meanwhile, has launched a probe into Facebook and WhatsApp. Turkey’s antitrust board launched the investigation into Facebook Inc and its messaging service WhatsApp Inc over new usage terms that have ignited privacy concerns.

Read more: After India and Australia, now Turkey, Germany and France look to rein in the Big Tech after what they did to Donald Trump

However, Uganda has become the first country to deal a big blow to American big tech, which has been having it too good for too long. By banning social media platforms, Uganda has sent a stern message across to all big tech firms – behave yourselves. If social media giants fail to mend their ways hereon, it would not be particularly surprising to see punitive action being taken against them in a multiplicity of countries.