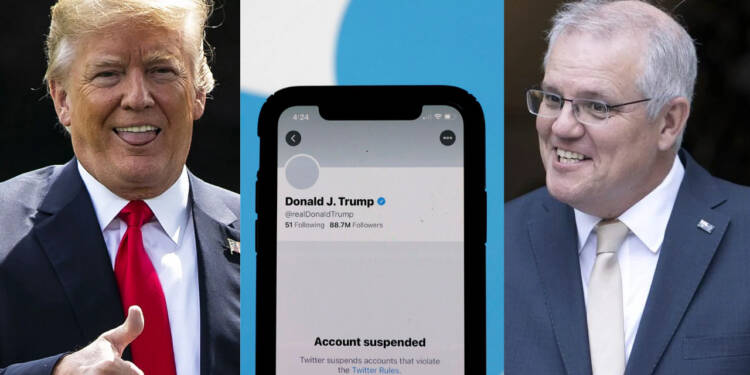 The big tech’s shocking decision to boot out Trump is drawing criticism across the world. And now, Australia has also started to crack down on social media giants.

McCormack, who is acting as the Australian Prime Minister while Scott Morrison takes to leave this week, told ABC radio that it was not up to Big Tech to decide whose voices were heard.

“I don’t believe in that sort of censorship,” McCormack added.

And then, the Acting Australian Prime Minister also said, “There’s been a lot of people who have said and done a lot of things on Twitter previously that haven’t received that sort of condemnation or indeed censorship.”

McCormack was referring to Chinese Foreign Ministry spokesperson Zhao Lijian. Last month, the Chinese spokesperson tweeted a doctored image of an Australian soldier smiling and slitting the throat of a young child. The fake news was openly disseminated on Twitter by Lijian.

Shocked by murder of Afghan civilians & prisoners by Australian soldiers. We strongly condemn such acts, &call for holding them accountable. pic.twitter.com/GYOaucoL5D

The Acting PM of Australia said, “Now, that has not been taken down, and that is wrong. If you’re going to take down Donald Trump’s Twitter feed, then think very carefully and closely about also taking down that photo, which should have been taken down weeks ago.”

But Twitter is hardly the only social media giant facing accusations of hypocrisy for restricting Trump’s profiles. Facebook, Instagram and Snapchat have all imposed temporary bans on Trump. Google, Apple and Amazon have also cut off Parler, a social media platform popular amongst Trump supporters. Parler CEO John Matze, however, said there was a double standard at play.

Australia however won’t let social media giants get away easily. The ACCC- Australia’s competition watchdog, has been working extensively to rein in the power of Google and Facebook in Australia. It is even implementing a Code that will compel both the companies to pay news media publishers for content.

Now, Australia also seems concerned about the unfettered powers of social media giants, when it comes to censoring expression of free speech on their platforms. ACCC Chairman Rod Sims even said that political leaders faced a “defining question” when it comes to controlling online content.

Meanwhile, Queensland Member for Parliament George Christensen has started an online petition in response to the ban.

“We ask that, as a matter of urgency, you (Communications Minister Paul Fletcher) legislate to ensure Twitter, Facebook, YouTube and other social media platforms can no longer ban, censor, suspend, “fact-check” or shadowban users for posting content which is lawful in Australia,” the petition read.

Australia’s Federal Parliament is presently preparing itself to debate on draft laws for taking down “abhorrent violent” material on the internet. Now, the Australia government may bring in a law to decide what content stats online and what gets deleted. Also, it can decide who stays on a social media platform and who gets booted out.

Canberra knows how to stand up for free speech, and therefore it has started cracking down on the big tech after what it did to Donald Trump.

‘Mourning will bring shame to the nation,’ Chinese citizens in Wuhan are not even allowed to mourn their dead