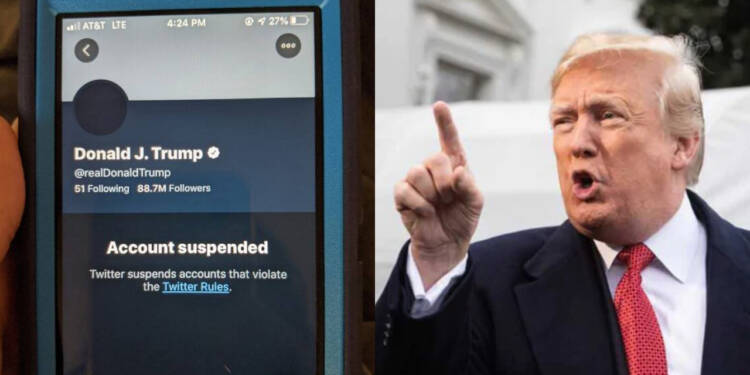 The outgoing American President Donald Trump has been banned from the microblogging platform Twitter permanently. The banning of a state head from a social media platform is a precedent that had never been set before. However, with the ban, a domino effect has begun and it might very well provide the fillip required to engineer an alternate right-wing social media environment. Donald Trump has indicated that he will put his resources into developing a social media platform that adheres to the voices of the conservatives and those who are flung away by the left-liberal cabal on platforms such as Twitter and Facebook.

After Twitter permanently suspended his @realDonaldTrump account, the American President Trump tweeted from the US President’s official @Potus account suggesting he would “look at the possibilities of building out our own platform in the future” and railing against Twitter.

Trump responded to the account ban by accusing Twitter employees of conspiring with his political opponents. “As I have been saying for a long time, Twitter has gone further and further in banning free speech, and tonight, Twitter employees have coordinated with the Democrats and Radical Left in removing my account from their platform, to silence me — and YOU, the 75,000,000 great patriots who voted for me.” he tweeted through the POTUS account.

However, Twitter could not gulp Trump’s criticism and the tweets were removed from the platform as soon as they were posted.

Read more: According to Western liberals and politicians, it’s violence only when right-wingers do it. BLM and Antifa were just cutesy street marches

Twitter is the same platform that claims to live and die by the virtue of Freedom of Speech and Expression. However, the social media platform’s actions like banning a powerful leader like Trump, suggest that tooting the horn of ‘FoE’ is merely a charade, invented to pander to the whimsies of left-liberals.

There is no iota of doubt that Twitter has an inherently left-wing bias. Reported by TFI, its founder Jack Dorsey has openly admitted on the record that conservatives fear to voice their opinion within Twitter itself as the left-wing employees outnumber them and further dominate them.

Therefore, if an individual, or for that matter, President of the supposedly most powerful country on the planet like Trump shares a viewpoint that is opposite from that of the left-wing, Twitter deems it unworthy of remaining on the platform. Poof! the tweets are deleted and accounts are suspended.

However, when the democrats in 2016 continued to undermine the election results by constantly evoking the Russian government and their alleged involvement, Twitter remained a mute spectator and observed a stoic silence, despite any shred of evidence able to indict the Republican President Trump in the last four years.

If what Democrats did was not persuading the American commoners then what Trump said mustn’t tantamount to the same, as well.

The permanent ban follows harvesting the data of 88.7 million people. In more ways than one, @Twitter now wields enormous clout over these people. Given zero ethics of #BigTech there's no reason to believe the harvested data will not be used for purposes that fly against freedom. pic.twitter.com/JD69QiVf01

This must be wake up call for all who don’t yet understand threat to our democracies by unregulated big tech companies.

If Twitter indeed wants to speak truth to power, it should have taken this step much earlier, when the likes of former Malaysian Prime Minister Mahathir Mohammed explicitly called upon the Muslims of the world to kill and murder the French people.

The cardinal sin committed by Twitter has opened the floodgates and people will actively start to question the intention of such social media platforms. Twitter cannot create a nanny state where it is the judge, jury, and executioner. With some 10 days remaining in Trump’s tenure, one can expect him to bring a sledgehammer on Twitter and simultaneously usher the world into a right-wing social media revolution, for it is the desperate need of the hour.