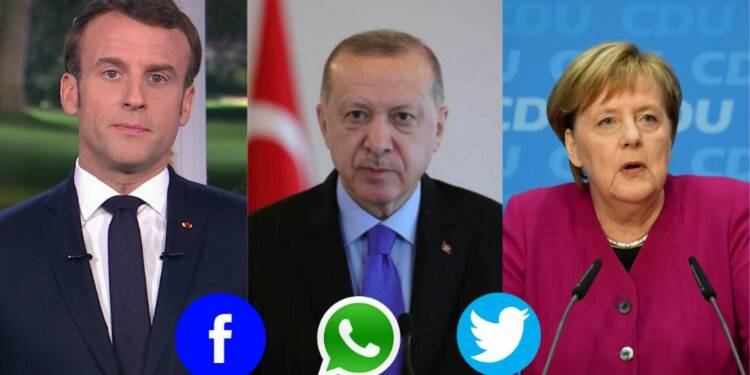 The big tech’s shocking attempt to silence US President Donald Trump has led to a worldwide outrage against social media giants. First, Indian lawmakers spoke up against what the big tech did to the US President. Then, Australian ministers also started questioning the double standards of social media corporates. And now, even Turkey is looking to rein in the big tech, while Germany and France have opposed social media bans and restrictions against Trump.

The Erdoğan administration in Turkey has even launched a probe into Facebook and Whatsapp. Turkey’s antitrust board launched the investigation into Facebook Inc and its messaging service WhatsApp Inc over new usage terms that have ignited privacy concerns.

According to the Turkish antitrust board, the new WhatsApp terms will result in “more data being collected, processed and used by Facebook.” The state regulator also announced that it was halting implementation of such terms.

Meanwhile, privacy concerns in Turkey are driving WhatsApp users to other messaging apps. The Turkcell Iletisim Hizmetleri AS-owned BiY, a WhatsApp rival, is gaining big in Turkey. The company on Monday said that it added approximately 4.6 million new users in just three days.

So, two big things are coming out of Turkey- one, an antitrust probe has been launched against Facebook Inc and WhatsApp Inc. And two, millions of users are embracing a WhatsApp rival. But why is the Erdoğan administration acting against the social media giant? Is it concerned about user privacy, or is there something more than what meets the eye?

Well, Erdoğan hardly cares about user privacy. Ankara seems rather intimidated by the extraordinary influence of Twitter, Facebook and other prominent social media platforms. These social media giants have huge stockpiles of data, which can at least be used in more ways than one during election campaigns. Also, recent events have shown that the big tech is not bipartisan. On big occasions, they can pick sides and harm even the biggest of political leaders.

At least on paper, the big tech has unbridled powers that can easily be exercised for influencing electoral outcomes. Consider this- the big tech has more data than any one of us can imagine. Their ability to target millions of users with highly personalised content is unmatched.

Also, the way Trump was booted out by Facebook, Instagram and Twitter shows that the social media giants decide who stays on their platform and who gets silenced. What happened with Trump can happen with any political leader, because no one gets to question the rationale behind blocking or restricting a social media account.

And then, Erdoğan is anyway paranoid about getting toppled by his political enemies. So, Turkey’s antitrust board started by launching an investigation into Facebook Inc and WhatsApp Inc.

Even Germany and France also seem concerned about the big tech campaign against Trump. German Chancellor Angela Merkel’s spokesperson Steffen Seibert said, “The right to freedom of opinion is of fundamental importance.” He added, “Given that, the chancellor considers it problematic that the president’s accounts have been permanently suspended.”

French Finance Minister Bruno Le Maire too said, “What shocks me is that it is Twitter that is shutting down Trump’s account. The regulation of the digital giants cannot and should not be done by the digital oligarchy itself. It is necessary but it must be done by States and by Justice.”

So, countries across the world now understand that big and influential digital platforms cannot be allowed to decide for themselves. The need for regulation, as well as digital self-sufficiency, for protection of sovereignty, are being felt. Twitter, Facebook and Instagram bans against Trump are no longer just a free speech issue, but also an issue of sovereignty concerning the world at large.