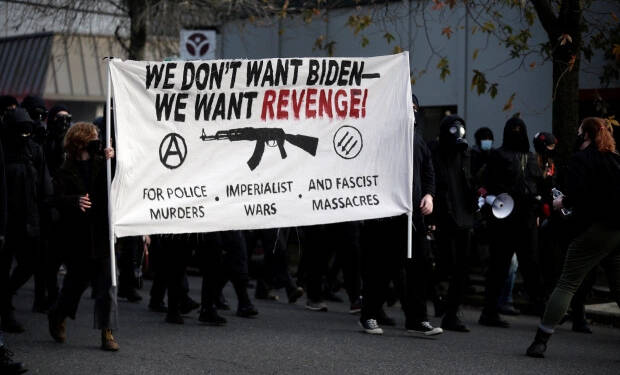 On the day of Biden’s inauguration, just hours after the ceremony, there were around 100 people in Portland, far-left group Antifa, on the streets, dressed in black creating ‘chaos’. It should be noted that a left-leaning President was being sworn into the White House.

Marchers held banners including messages “We are ungovernable” and “A new world from the ashes.” One of the signs read ‘We don’t want Biden, we want revenge!’ in response to ‘police murders’ and ‘imperialist wars.’

Another banner read “We don’t want Biden — we want revenge”

At the political party premises, the Portland far-left group smashed windows and spray-painted anarchist slogans. It was one of at least four groups that were preparing to assemble on the Inauguration Day in the area, police said. The group had about 200 members at its peak.

According to the Portland police, eight people were arrested during the protest. They were charged with a crime, destructive device possession, riot or malicious burning. Officers seized batons, irritant spray, Molotov cocktails, knives, and a crowbar while they were making arrests, police said.

During a rampage through Seattle after the inauguration of President Biden, Antifa members smashed up the historic site of the very first Starbucks. “F*** Trump, f*** Biden too, they don’t give a f*** about you,” the protesters chanted. Seattle cops made at least three arrests as at least 100 protesters scrawled graffiti, smashed windows and even set fire to an American flag, according to the Seattle Times.

Some said they took to the streets because they were disgusted that the new president had called for unity rather than attack their right-wing opponents. “Calling for unity with people who actively want to harm people is disgusting,” a woman named Anna told the Seattle Times.

BLM protests smashed the whole country and resulted in losses of millions and millions of dollars. Democrat Ted Wheeler, Mayor of Portland encouraged the BLM protesters and even turned up at a protest himself.

While the ‘Black Lives Matter’ protests shook the country, Joe Biden stood in silent letting protesters rampage through the streets and destroying private owned businesses. The loss was irreparable as the country’s fabric of cohesion was torn apart.

Moreover, when Trump supporters scaled Capitol hill, the outcry from the left was appalling. The same left that had justified the BLM protesters’ right to damage property because they wanted to be heard, were slamming the Capitol hill protesters for their extravagance.

Thus, it was not so surprising to see Antifa back on the streets on the day; Joe Biden was being sworn in as President. He has enabled them to become so powerful. On a day when security was beefed up to prevent any far-right ‘mobs’, it was the far left ‘protesters’ that ran riot.

The open biasness to ideological favouritism is clear on Biden’s first day in office, and if these are just examples of how things would be, then the United States should buckle itself up as darker days loom ahead.