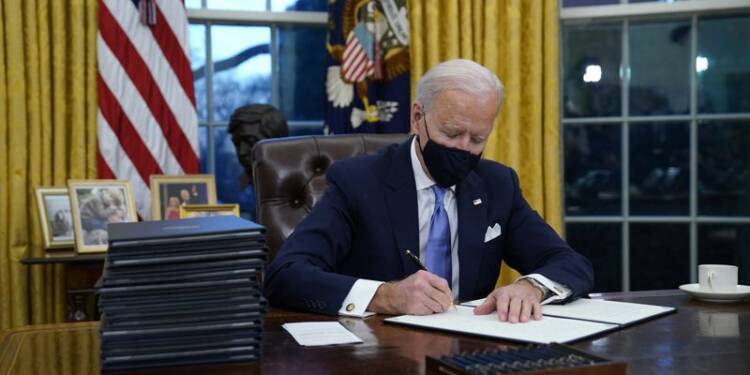 Continuing his assault on Donald Trump’s policies the newly elected President Joe Biden has outlined a plan to legalize illegal immigrants in the country. Moreover, with the sole aim of stamping his mark on societal norms has signed an executive order removing the concept of Gender in sports.

A hard left policy chief is at play in the White House. The policies will make the United States susceptible to future changes that only the left section of the society needs or recognizes while the majority can only bear and watch.

President Biden has on his first day as President signed an executive order: The Executive Order on Preventing and Combating Discrimination on the Basis of Gender Identity or Sexual Orientation. The order in common terms removes gender identification from the concept of sports.

A sport offers much more than just physical exertion. For women, it offers a safe space which has now been removed, credit to Joe Biden. A sports field is a place to express oneself without the constraints of a classroom. While it must feel liberating to share this bright joyous and open field with the other gender, the physical attributes of the genders are not similar.

This order declares “Children should be able to learn without worrying about whether they will be denied access to the restroom, the locker room, or school sports. All persons should receive equal treatment under the law, no matter their gender identity or sexual orientation.”

A boy who identifies as a girl can now play for the girl’s team. A boy who has been raised as a boy, nevermind his sexual orientation or his biological reproductive organs, his physical attributes would still remain the same.

Moreover, it is an insult to the generations of women who have strived to create a platform exclusive to them. And now Biden under pressure from a transgender lobby has implied, without due scientific discourse and consultations, that transgender men can play in a girls’ team and vice versa.

For decades the transgender and the feminist’s lobby have worked together but now with the passing of this order rifts can be seen. Olympic track-and-field coach Linda Blade told the

Wall Street Journal’ “Finished. Done,” “The leadership skills, all the benefits society gets from letting girls have their protected category so that competition can be fair, all the advances of women’s rights—that’s going to be diminished.”

Ms Blade noted that parents of teen girls are generally uninterested in watching their daughters demoralized by the blatant unfairness of a rigged competition. And this has exactly what has happened, to appease a section of a society Biden has deprived women, generations of struggle and it is extremely unfair.

And it’s not just this order that Biden has signed to cater to the needs of a marginalised section. Marginalised or not women have been striving for their rights and this order is going to cost the feminist movement years of irreparable damage.

But as the title implies, this was not the only order Biden wants to plan to increase his voter base, right from the first day of his Presidency.

In a symbolic gesture, Biden wants to remove the word alien from the United States and call the illegal immigrants- non-citizens. Using the word non and citizen together is an abomination. It disrespects every hardworking American citizen, as it brings an illegal immigrant and a bred and born American at the same juncture. The only difference that remains is the absence and presence of documents.

Read More: Like Obama, Joe Biden shows that he doesn’t care at all about American soldiers

This would put tremendous pressure on the US economy already slumped due to the impact of the coronavirus.

Future implications of abolishing the gender concept could spill out to other parts of the society which would be damaging to the women rights associations who have come so far in their struggle to create something for the women. Moreover, the order to label illegal aliens as non-citizens will set a demoralising precedent among the masses.

Biden must understand while it is a good cause to lift the marginalised, but if done so at the expense of the majority, it will tear the social fabric apart.