Like Obama, Joe Biden shows that he doesn’t care at all about American soldiers 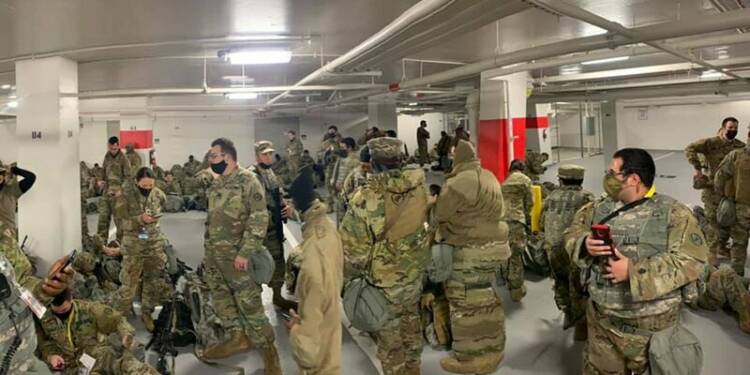 A controversy has erupted immediately after the 46th US President Joe Biden’s inauguration ceremony. Thousands of National Guard soldiers who were deployed to protect the 46th President of the USA after the events of January 6th have been immediately forced out of the US Capitol building to the cold, dingy, basement garages nearby after the legislature resumed the work.

“Yesterday dozens of senators and congressmen walked down our lines taking photos, shaking our hands and thanking us for our service. Within 24 hours, they had no further use for us and banished us to the corner of a parking garage. We feel incredibly betrayed,” one of the Guardsman said.

“Yesterday dozens of senators and congressmen walked down our lines taking photos, shaking our hands and thanking us for our service. Within 24 hours, they had no further use for us and banished us to the corner of a parking garage …” one Guardsman said https://t.co/2QneUNtBDe pic.twitter.com/Q8lZzP7hHV

Pictures that went viral over the internet showed troops stretched out under fluorescent lights in parking slots, with few toilets, outlets for charging phones, or other facilities. Some media reports stated that for a group of 5,000 soldiers, there was just one electrical outlet and one bathroom with two stalls.

As a damage control measure, first lady Jill Biden paid a surprise visit to a group of military personnel outside the building, offering them nothing but chocolate chip cookies, She, however, did manage to pose for photos, so that the liberal media had something to sing ballads for her generosity.

While the National Guards are withstanding the poor conditions, their misery is being compounded by statements of the Democrat leaders who are accusing them of being Trump supporters and plotting to kill Joe Biden.

Reported by TFI, Democratic congressman Steve Cohen said that the Trump supporters within the National Guard who have been designated to protect Joe Biden ‘might want to do something’ to the new president.

It is an undeniable fact that the army veterans voted en masse for Trump, owing to his policy of treating soldiers like American citizens, and not some disposables who can be shipped off to foreign lands to serve the vested interests of politicians.

Unlike his predecessors, Obama and Bush, the former American President Donald Trump did not start a single war within his tenure of 4 years, albeit worked on brokering one peace accord after another between the Jewish state of Israel and the Arab nations in the Middle East and simultaneously pulled the troops out of hellhole like Afghanistan.

However, it seems like Joe Biden is expected to continue Obama’s legacy of thrusting American soldiers into Afghanistan. Biden has repeatedly talked about ‘Responsible withdrawal’ of troops from Kabul.

In an interview last year, Biden said the United States should maintain a “very small” counter-terrorism footprint dedicated to preventing the resurgence of al Qaeda and the Islamic State, or ISIS in the region.

.@ForeignAffairs just published this piece in which I explain why–given how situation in #Afghanistan has evolved–US does not have realistic option of withdrawing but *also* keeping a counterterrorism military footprint there. {No paywall for 48 hours.} https://t.co/YHc58fDgJg

Throwing the jargon ‘Responsible withdrawal’ is nothing but a means to keep the American forces in the desolate loneliness of wilderness. With Biden back in the office, the Military-Industrial Complex is now firmly back in power, and the American soldiers will have to face the music because of it.

The soldiers are prepared to brave any harsh conditions but if they are deployed in the country’s capital and in a building that is seemingly the hotspot of American bureaucracy — then one would naturally expect better-operating conditions for them.

With the threat of COVID-19 looming ubiquitously, it doesn’t seem the most intelligent of ideas to pack the soldiers like sardines in some underground garage.

Read more: Biden Administration is all set to purge the “racist and extremist” elements in the US Army. Little do they know that it can lead to a mutiny

The mistreatment of National Guardsmen gives us a brief idea of how much Biden respects and cares for them. For Biden and the Democrats, the soldiers are the worthless entity that could be sacrificed anyway, if it serves their twisted purposes.