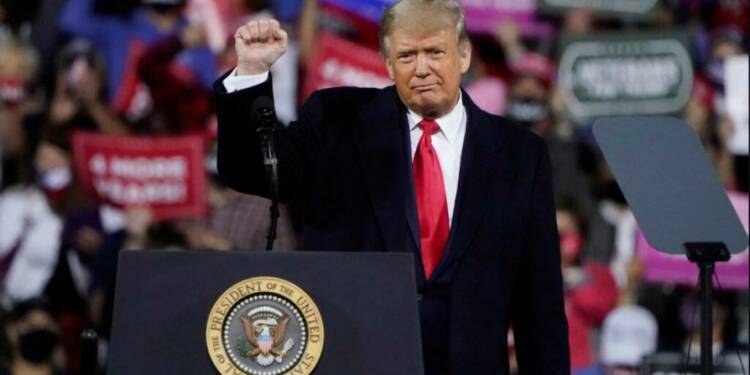 “So just a goodbye. We love you. We will be back in some form.” This is what former US President Donald Trump told his supporters before boarding the Air Force One for the final time on Wednesday morning. So, what is Trump trying to convey? Is he going to come back bigger, better and stronger? And if so, how?

Well, if a WSJ report is to be believed, people familiar with the matter said that Trump wants to launch a new political party. The people said that Trump would want to call it the “Patriot Party.” This party is going to change the way we understand American politics. The “Patriot Party” is likely to attract anti-establishment and anti-war political leaders, thinkers and intellectuals, and represent what Trump symbolises- a movement against the American Deep State.

We can assume that the “Patriot Party” will be a coalescence of Trump’s biggest goals, like ensuring a dignified life for US military veterans, no regime change wars, bringing American troops home and historic tax cuts.

Consider this- even in his Farewell Speech at Joint Base Andrews, Trump said, “The vets have given us an approval rating like it has never been before. We took care of our vets and our beautiful vets, they were very badly treated before we came along. And as you know, we get them great service and we pick up the bill and they can go out and they can see a doctor if they have to wait long periods of time.”

The point remains that no former US President cared as much for the military veterans, as Trump did. The US military servicemen and veterans, who have borne the brunt of American war lobby’s misadventures actually connect with Trump over this issue.

Take, for example, Michael Thurman, a member of About Face: Veterans Against the War, formerly known as Iraq Veterans Against the War. During a Biden campaign event in Oakland, California on March 3 last year, Thurman asked Joe Biden, “We are just wondering why we should vote for someone who voted for a war and enabled a war that killed thousands of our brothers and sisters [and] countless Iraqi civilians.”

Thurman added, “My friends are dead. … Their blood is on your hands,” after which Biden was seen walking away. Trump’s “Patriot Party” could be all about giving a formal voice to such sentiments.

Trump also spoke about tax cuts in his Farewell Speech. He said, “We also got tax cuts, the largest tax cut and reform in the history of our country by far.” Trump added, “I hope they don’t raise your taxes. But if they do, I told you so.”

And Trump does need a new political party. The US needs this party. Trump or his followers cannot take on the American Deep State with the Grand Old Party (GOP). The events following the US Capitol security breach have exposed the deep fault lines within the Republican Party. Republicans like Senate Majority Leader Mitch McConnell or Senator Mitt Romney have themselves been at loggerheads with the former US President Donald Trump.

Now, with the “Patriot Party”, Trump can offer a choice to those Republicans who understand how it is Trump who reinvigorated the GOP and held it together for these many years. We are talking about people like Ted Cruz, Rubio and Mike Pompeo who would be tempted to join a new Trump-led political venture.

And why just the Republicans? There are anti-establishment leaders all across the US political spectrum. Take, for instance, Tulsi Gabbard– a dynamic Democrat leader, who has been sidelined by her own party for speaking up against regime change wars and the interventionist lobby. Such leaders can find expression of their anti-establishment sentiment in the “Patriot Party”.

Finally, Trump is in the perfect situation to find and lead a new political venture. He has nothing to lose. Trump has lost the Presidential Polls, and he has also been muted by the American liberal media as well as the big tech.

Trump is thus looking to change American politics forever. The “Patriot Party”, if and when formed, can bring about a revolution in American politics and animate anti-Deep State ideology in a completely unique manner.

Team Biden has suddenly gone soft on Donald Trump and his supporters, the reason is fear

Obama gave China the South China Sea and Biden will try to handover the Indian Ocean to Jinping. But won’t succeed