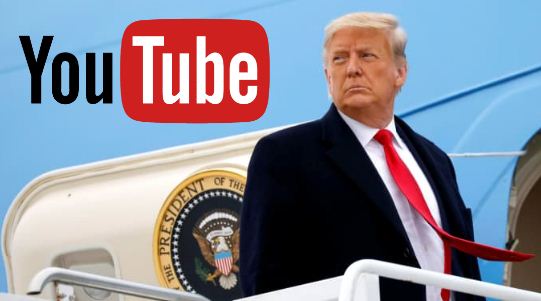 Joining the club of its big tech brothers, Google-owned YouTube suspended President Donald Trump’s account for a minimum of seven days, which many believe will be extended according to the whims and fancies of the firm and its anti-Trump deep-state bosses. In fact, as per a report by Reuters, the YouTube ban on Donald Trump was advocated by civil rights groups from the U.S., who threatened to boycott YouTube and Alphabet advertisers if their demand for a ban on Trump’s channel was not met. Evidently, such pressure tactics seem to have worked, with YouTube going a step further in its bid to woo the Democrats.

Apart from banning Donald Trump’s 2.77 million subscribers-strong YouTube channel, the Google-owned video behemoth also disabled the comments section on Trump’s channel ‘indefinitely’ for any and all future uploads which will be made after the temporary suspension of the account is lifted. According to YouTube guidelines, if the channel continues to post content that goes strictly against the guidelines even after the ban is lifted and within a period of 90 days, YouTube will ban the channel for two weeks, and a third strike against the channel would mean a permanent ban.

“In light of concerns about the ongoing potential for violence, we removed new content uploaded to Donald J. Trump’s channel for violating our policies,” YouTube said in a statement. It added therewith, “The channel is now temporarily prevented from uploading new content for a ‘minimum’ of 7 days.” Of course, much like the other big tech firms which have launched an all-out offensive against a sitting U.S President, YouTube too does not have any cause to defend its action against President Trump. Reast assured, the President of the United Stated did not himself incite any mob to effectuate violence in and around Capitol Hill.

Read more: Donald Trump: The lion king who was hunted down by hungry hyenas

The YouTube ban on Trump comes in the backdrop of at least six American big tech companies banning Donald Trump from their social media platforms, including Facebook, Twitter, Snapchat, Instagram, Twitch and Reddit. The muzzling of a sitting U.S. President by big tech firms has shocked the world community, which has been made witness to the haphazard and causeless manner in which social media platforms harbour the ability to de-platform any leader which they do not seem to like. Countries like India, Australia, Germany, France and even Turkey are sending out uncomfortable signals to such firms, even as poll-bound Uganda has already taken the extreme decision of banning such social media platforms. The journey of big tech corporates from heron will be anything but rosy.