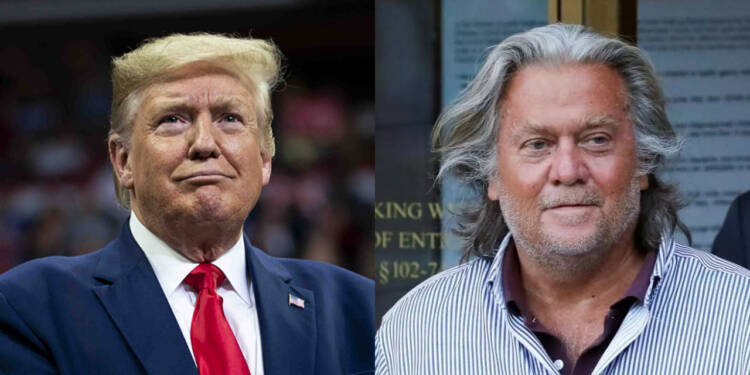 Trump’s final days in the White House will be remembered for three things – his unrelenting posture on China, him getting banned from major internet companies aka ‘the big tech’, and him pardoning Steve Bannon but not Rudy Giuliani or any of his offspring.

Throughout his time as the President of the world’s strongest democracy, Trump was a subject of ardent criticism and critique from left-liberal media conventionals and otherwise. After the capitol riots, his Twitter account among others was banned and he was vilified as an enemy of the American state.

Trump’s views were not wrong, they just did not conform to the views and the beliefs of the people who run these internet companies. They claim to be a platform for non-partisan political discourse but their actions in recent weeks have disputed their claims. But it seems that Trump is still not done and dusted as he sent a statement of intent when he pardoned Steve Bannon and promised in his farewell speech that the movement that he has started would go on.

As the leader of the United States, Donald Trump has completed one of his last actions. He officially issued a full list of Americans, after days of speculation, who will be given a presidential pardon.

And although the outgoing President granted 73 people clemency and commuted an additional 70 sentences, some of his greatest allies were notably absent from the list.

Rudy Giuliani, Trump’s personal lawyer, “Tiger King” Joe Exotic, Julian Assange of Wikileaks, and the three eldest children of Trump, Eric, Ivanka, and Donald Jr, were all rumoured to obtain a pardon, but are nowhere to be found.

But it was the name of Trump’s influential former advisor Steve Bannon on the pardon list which raised many eyebrows.

The Trump administration had previously cracked down on Steve Bannon for allegedly duping Trump’s supporters and investors for millions of dollars. It was alleged that he had promised them that their money would be used to fulfil Trump’s chief campaign promise to build a wall along the southern border, a wall which the outgoing President had promised that Mexico will pay for.

It later became known after the fiasco(s) Trump had reconciled with his former chief strategist.

At the end of his farewell speech where he took shots on China, and the muzzling of free speech by the big techs, Trump claimed that it is just the beginning and the best is yet to come. After which reports have started to come out of a new political party called the Patriot party, giving a clear indication that Trump will not be left in the pastures.

In his last days, while he faced the wrath of the Democrats and their deep state benefactors, Trump was also subjected to ominous backstabbing from the Republican senators. While many supported their president, others did not, sowing the seeds of discontent in the party.

The liberal media, including the big tech, has been at the front on leading the attack on Donald Trump, his policies and his character, leaving no stone unturned. Amazon even booted a ‘non-partisan’ social media platform Parler which had a fair share of Trump supporters.

With news of a new political party, Patriot Party, in the works Trump has given a clear indication that he will not be trifled with and left to roam the seas. Thus, Steve Bannon’s pardon makes perfect sense. As his chief strategist, Bannon, a far-right conservative can gather the masses once more.

Before becoming Trump’s aide, Bannon was a voice of populist and outsider conservatism. Bannon, who served in the Navy and worked at Goldman Sachs and as a Hollywood director, headed the conservative Breitbart News before being tapped to serve in its crucial final months as Chief Executive Officer of Trump’s 2016 campaign.

Bannon’s pedigree as an important campaigner was underlined in Trump’s 2016 campaign. Moreover, Bannon’s know-how on running conservative news would be crucial as Trump not only fights the democrats but the whole of the left-liberal media and ‘the big techs’.

Left-Liberal media channels have not stopped gushing over Biden’s presidency while they have seriously underplayed Biden’s picks for anti-trust cases against the ‘big tech’s.

Therefore, Trump would need a conservative media atmosphere of his own that supports his ideas and creates the discourse for him and who better than Steve Bannon for his knowing and unknowing qualities as a conservative and his experience in running conservative news agencies such as Breitbart News and War on the Rocks.

With discontent among the people and in the Republican party itself with the latest election results, Steve Bannon’s pardon is a move aimed with future insight. Trump is not done and dusted. On the contrary, he might just be getting started.