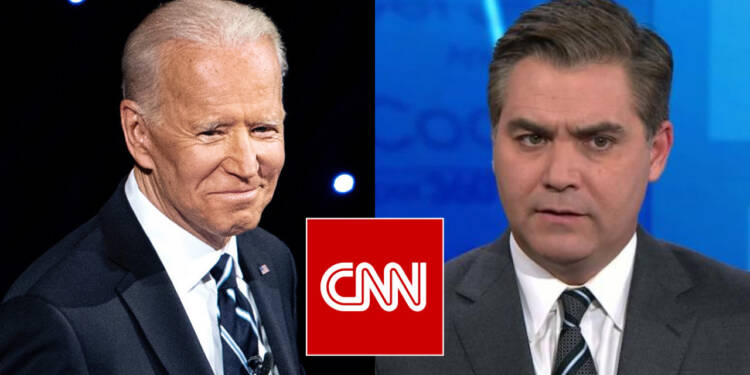 CNN is all over the place ever since Biden’s inauguration. The bizarre levels of romanticism between CNN and the new administration have made many believe that the good old days of friendly media enjoying free breakfasts and dinners at the White House are back. In fact, CNN has been gushing over Biden of late, and its pliable coverage of the new administration for the past few days has made people question the very veracity of the coterie of liberals at the media organisation to be referred to as ‘journalists’.

If Joe Biden appointing former CNN global affairs analyst Antony Blinken as his Secretary of State and Jen Psaki – until recently a Contributor at the liberal media organisation as his Press Secretary was not already enough to cement assertions of the Democrats and CNN being back to the good old days of back-scratching each other, the international media organisation has also withdrawn combative White House correspondent Jim Acosta with Biden now at the helm of affairs. This is a signal of intent by CNN, one which proves that the days of “fearless and objective journalism” are over.

Although CNN projected itself as the sole mantle carrier of free and fearless journalism under the Trump administration, its meek prostration before the Biden regime has shocked many. While we all knew that CNN would pull a flip after the inauguration of Joe Biden, nobody had imagined that it would have been so magnificent. Take for instance CNN political director David Chalian’s emotive fawning over Biden a day before his inauguration. The man literally said that the National Mall lights along the reflecting pool were like ‘Biden’s arms embracing America’. Chalian added, “It was a moment where the new president came to town, and sort of convened the country in this moment of remembrance, outstretching his arms.”

CNN's David Chalian says that the side lights on the National Mall's reflecting pool are like "extensions of Joe Biden's arms embracing America." pic.twitter.com/G88C8UCN3C

As a matter of fact, it seems all of CNN’s staff has grown a liking for mysterious metaphors which they are manufacturing for the sole purpose of glorifying the Biden administration. We say so because no less than CNN’s head of communications Matt Dornic took to saying that Biden’s inauguration fireworks would ‘inspire our friends and shake our foes’. To be precise, the CNN executive said, “This team truly understands optics. These images will inspire our friends and shake our foes.” It is being said that Matt Dornic was no less than referring to Biden and liberals’ ‘enemies’, rather than those of America.

The Biden and the liberal media love story is one which has indeed been written in heaven, as arrows of the angels of passion pierce through the hearts of anchors at CNN and other media outlets while they drool all over a delicious Democrat regime taking over from the demonic dictator called Donald Trump. In fact, at CNN, election expert Wolf Blitzer was overawed seeing visuals of Trump leaving Washington DC, and even took to calling the limited number of spectators and fans gathered at Joint Base Andrews to bid farewell to the outgoing President as “a little pathetic, a tiny little crowd.”

Read more: Democrats, liberal media and the big tech are making sure that Donald Trump never returns as the President of the United States

It is truly amazing how senior journalists at CNN made no secret of their total and submissive love for President Joe Biden. Needless to say, on inauguration day, such pliant journalists would have earned themselves one cookie each from their supreme master. But the bedding of American liberal media isn’t over just yet. CNN also relentlessly reported a fake story of the Biden administration starting the entire American vaccine distribution plan from ‘scratch’, as there was absolutely nothing which the previous administration left for them to work on. Such was the falsity of this story that Biden’s White House adviser Dr Anthony Fauci was himself forced to debunk it, saying, “We certainly are not starting from scratch because there is activity going on in the distribution.” The fake story was run by CNN no less than 47 times.

A desperately jealous CNN is also making sure that nobody else comes between it and President Joe Biden. To the same effect, multiple CNN anchors and staffers joined the chorus along with Democrats to take Fox News off the American airwaves, allegedly for pumping riotous sentiments among the mob who attempted a hijack of Capitol Hill and the US Congress on January 6.

CNN’s drive for asking the tough questions and taking on the powers that be has definitely evaporated. The liberal news network is now focused instead on how many croissants its correspondents are fed by the White House and the number of funny acts Biden can pull at his new residence daily, effectively reducing the American presidency to a joke.