Canada joining Quad exercise is terrible news for the world, as Trudeau’s love for Jinping is not lost on anyone 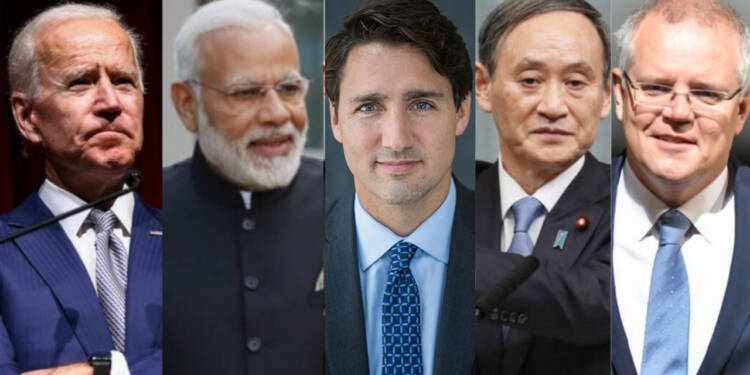 Canada’s entry into the Quad can be the final nail in the coffin for the organisation as well as the world over attempt to contain China’s belligerence. As per news reports, Canada is participating in a joint exercise in the Pacific Ocean with the nations that comprise the Quad: the US, India, Japan and Australia. On the surface level, it may look a welcome move, but this can be soon turned into a Trojan Horse moment for the Quadrilateral Military Dialogue.

It is a well-known fact that Justin Trudeau has a great bonhomie with the Chinese leader Xi Jinping, and in such a situation, having Canada into Quad exercises may hamper the smooth functioning and coordination among the members. The addition of like-minded countries within the ambit of Quad plus was always under consideration, however, Canada is a special case.

Canada is compromised in favour of Communist China and it will become the arbitrator of China’s interests within the organisation and turn the Quad dysfunctional. The fact that the Quad was supposed to be the last stand for the countries globally to contain China’s monopoly and hegemony of the Indo-Pacific, it makes this development all the more terrible for the whole world.

The best example to understand the viability of this terrible possibility is the Five Eyes (intelligence) alliance. The organisational functioning of the Five Eyes has been jeopardised by the actions of Justin Trudeau and Jacinda Ardern as both of them have become pro-China voices within the organisation. Within Canada, the pro-China lobby has reinvigorated efforts to get Chinese tech major Huawei’s CFO Meng Wanzhou released and New Zealand is by itself infested with Chinese influence. While the Five Eyes was supposed to lead the free world’s fight against Communist China, due to the compromising members has come to a sorry state where it can do nothing.

Read more: Trudeau and Ardern: The two insiders who are openly compromising the Five Eyes group at the behest of China.

The anti-submarine warfare exercise Sea Dragon 2021 is being organised at the Andersen Air Force Base in Guam by the United States. The participating countries are the Royal Australian Air Force, Royal Canadian Air Force, Indian Navy, and Japan Maritime Self-Defence Force.

As per Hindustan Times, David Lavallee, public affairs officer with Canadian Armed Forces’ 1 Canadian Air Division and Canadian NORAD Region Headquarters, said, “Canada is also a Pacific nation. The RCAF often works closely with the US Navy’s Seventh Fleet, and our participation in Sea Dragon is an opportunity to demonstrate the strength and durability of our alliances in the Indo-Pacific region.” The statement may sound very optimistic, but it does not change the facts on the ground.

Since the revelation of Canadian Prime Minister Justin Trudeau trying to bring the communist state of China and its troops to Canadian shores hit the social media platforms, there has been a palpable change in sentiments regarding Trudeau and how the level to which Canadian government is compromised. However, while the international media has covered the news actively, it is the Canadian media, ruling Liberal party, and the opposition parties that have been tight-lipped on the entire issue in Canada. This should be enough to get a real understanding of ground reality and the extent to which Canada has been compromised in favour of the Chinese Communist Party.

Read more: China’s hold on Canada is so strong that the government, opposition and the media are tight-lipped about the PLA war-drills.

The Quadrilateral security dialogue was supposed to be the ultimate answer to the Chinese hegemonic designs and neo-colonialism plans. And the member states were open to welcoming like-minded countries into a Quad plus arrangement. However, the entry of Canada, which has proven its allegiance to the Chinese Communist Party time and again, will become the Trojan Horse moment for the organisation, and the possibility, this could lead to the failure of partnership among the four major world powers is the most terrible news for the whole world.

Macron’s Trumpism in dealing with Canada, something that every country must emulate