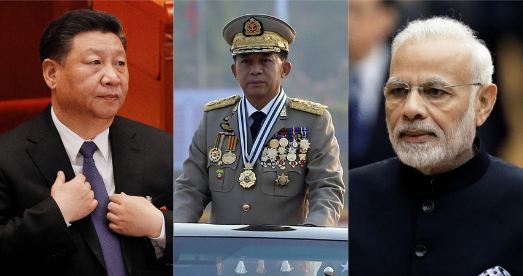 A video of an aerobics instructor has taken social media by surprise. The video captures a woman in Myanmar who was doing her regular aerobics class out in the open without realizing that a military convoy was moving and a coup was under process. In the video, we can see the military convoy reaching the parliament, passing through right behind the woman, as she performs aerobics, with no realisation of what is about to happen.

A woman did her regular aerobics class out in open without realizing that a coup was taking place in #Myanmar. A Military convoy reaching the parliament can be seen behind the woman as she performs aerobics. Incredible! pic.twitter.com/gRnQkMshDe

In the backdrop of these latest developments, everyone seems to have become a Myanmar expert. While everyone is easily saying that the development in Myanmar is favourable to China and moving forward it will become pro-Beijing, they forget that it was the Aung San Suu Kyi-led government under which Myanmar was inching closer to the Communist regime of China. And this is why the latest political changes in Myanmar will make sure that the country becomes more anti-China and comes closer to India.

While most of the newly declared Myanmar experts are claiming that this is a signal to the USA and a move towards the CCP, it is not viable reasoning as Myanmar for a very long time was sanctioned and isolated in the world. The USA has not been a significant factor, thus, looking at it from a China-USA perspective is not correct. The Myanmar Army has worked closely with India and the most overt proof of the same was India recently gifting a submarine to the Burmese military. Thus, as things are transpiring, the Indian hand will get more powerful going forward, with China losing out in the process.

In mid last year, the Myanmar Army spokesperson alleged, “one foreign country” is providing sophisticated arms and financial support to Myanmar based insurgent groups. Brig Gen Zaw Min Tun- the spokesperson for Tatmadaw (Myanmar military) said that – Arakan Army, Ta’ang National Liberation Army, the Kachin Independence Army the Shan State Army-North, and United Wa State Army (UWSA) – all of which are ethnic rebel armies based in Myanmar’s northern province which share a border with China’s Yunnan province – are being supported by Chinese businessmen and the Chinese Communist Party.

This overt criticism of the Chinese Communist Party’s involvement with the insurgents tells that the Myanmar Army’s critical view of the CCP is a good sign for India-Myanmar relations. Myanmar has been cooperating with India in joint operations to destroy the terror camps operated by the Arakan Army on the Indo-Myanmar border who pose a possible threat to the ambitious Multi-Modal Transit Transport Project. India and Myanmar share a good deal of security cooperation and the Armies of the two countries have also worked together in striking the NSCN-K (National Socialist Council of Nagaland-Khaplang) camps within Myanmar.

Read more: Myanmar- The next-door neighbour which could fall into China’s trap if we don’t help

The close cooperation between the Indian government and the military leadership in Myanmar has become strong. The two countries are working together to create an economic corridor connecting India’s Northeast with Southeast Asia. The connectivity projects in the Northeast under the Japan International Cooperation Agency (JICA) create vast array roads improving the connectivity with Myanmar. The highways are part of a larger project which connects India, Myanmar and Thailand. And part of it, the highway connects Mandalay, Myanmar’s last royal capital before British annexation and heads towards the Thai border, with Myawaddy being the last destination on the Myanmar side. The route terminates at Mae Sot in Thailand. Myawaddy acts as the junction between two projects. It is the starting point of the East-West Economic Corridor (EWEC), which heads towards Da Nang in Vietnam, placed facing the South China Sea. The project is set to make Myanmar a node to South and Southeast Asian connectivity.

This tells us how the Burmese military is accepting Indian investment while keeping large Chinese investment at bay. The fact that Myanmar has not allowed Chinese investments in a large hydroelectric project means that the de-facto rulers of the country are not swayed in the favour of the Chinese and as the de-facto rulers are now again turning into de-jure rulers, it means that going ahead, India and Myanmar will see closer cooperation and any mischievous attempts by China will find it further away from Myanmar and even jeopardize its pipeline which goes through Myanmar into Yunan province.