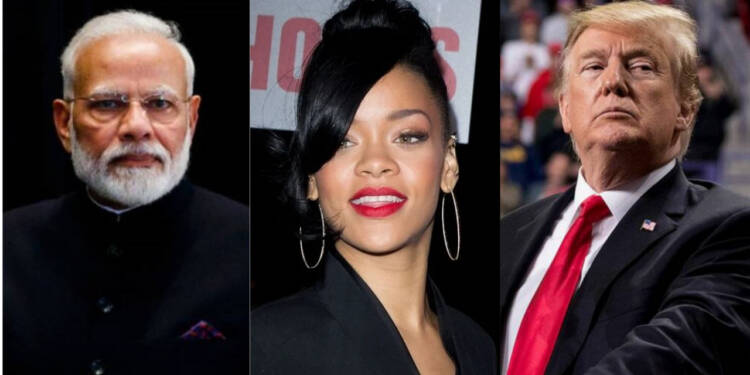 The tenure of US President Donald Trump saw a full-fledged systematic attack by the left-wing intelligentsia, and their puppet celebrities. It was the most coordinated and the most publicised bashing of a non-establishment leader of the USA. All of this culminated in the successful de-platforming of the most popular leader of the world, and now it seems that they have their eyes on the Indian Prime Minister Narendra Modi. In some aspects similar to the US President Donald Trump, PM Modi is an anti-establishment leader and has challenged the dominance of the political cabal which has fostered the emergence and nurturing of the leftist-socialist intelligence.

The leftist cabal internationally despises anti-establishment politicians as they threaten the status quo which these people have created and the power they have been enjoying for a long time. The sudden and unrelated tweets by American popstar Rihanna, Greta Thunberg ( Climate and environmental activist, as per her Twitter bio) among others, has brought to fore the involvement of multiple vested interests with deep enough pockets. And the fact that after Donald Trump, India’s Prime Minister Narendra Modi is the world’s most popular anti-establishment leader, has made him the left’s biggest target.

The fact that these tweets come after the protests lost steam on the backdrop of the rioting which took place in New Delhi on India’s Republic Day by the farmers and protestors when they were permitted to protest peacefully, further explains the timing. While the tweets by Rihanna and other American celebs look on the face of it paid tweets, the most fascinating one comes from Greta Thunberg, as the farmers she is supporting are standing for everything that she has been protesting against, her whole life.

We stand in solidarity with the #FarmersProtest in India.
https://t.co/tqvR0oHgo0

As many people on Twitter claimed that the fact that farmers are asking for state immunity to burn stubble, free electricity, overburdening of soil with fertilisers and not caring for the water table, all of the stands are in polar opposite to what Greta preaches, tells us the intent. The intent is that a bunch of vested interests colluding together to counter the rise of India, as well as counter the rise of Indian Prime Minister Narendra Modi, who is the biggest threat to the left cabal after Donald Trump.

The irony! Climate champion standing in support of farming practices that have led to poisoned land, vanishing water-table and the “cancer trains”. India can definitely do better. India is trying to do better by bringing in long awaited farm reforms. Pls don’t muddy the waters. https://t.co/mCHXaBrI1Y

The tweet by Jeff M. Smith best encapsulates the arbitrariness of the tweets.

Maybe because we're reeling from a crippling pandemic and protests over Indian agricultural reforms aren't a top priority for most Americans right now? https://t.co/llVzJngJKp

The three farm laws which are being protested were passed by the Parliament of India, after a full debate and discussion. These laws are reformist legislation relating to the agricultural sector. These reforms give expanded market access to the agriculture sector which is still monopolised by the government APMC ‘mandis’ or licensed shops and provided greater flexibility to farmers.

The Indian farmers still can’t sell their products legally to anyone or anywhere other than the APMC shops which are licenced by the government of India and thus tend to manipulate the prices because of the obvious monopoly. However, these legislations open the agriculture sector and bring it to the mainstream of the Indian free market system and away from the Soviet-era socialist systems. They also pave the way for economically and ecologically sustainable farming. However, the vested interests are spreading misinformation using the mainstream and other channels, and are even going to the extent of stating that the land of the farmers will be taken away from them which is nothing more than an obvious scare tactic.

The three farm bills seek to liberalise the agricultural sector and lead to huge growth in the income of the farmers. Almost three decades ago, when India was liberalising its services sector, there was the same opposition but since then the sector has grown at double digits.

From the very beginning, the protests are full of ironies. They are being led by people who previously supported the idea of joining the agriculture sector with the mainstream of open market of India, and are now opposing the bills. The political parties which had earlier proposed similar bills in the Indian parliament and promised similar changes in their election manifestos are now at the forefront of these protests. Thus, it is not about right and left, but about who can bake the most political cakes and eat them too.

However, the Indian government has acted with godspeed and in a press statement by Ministry of External Affairs, stated, “Before rushing to comment on such matters, we would urge that the facts be ascertained, and a proper understanding of the issues at hand be undertaken. The temptation of sensationalist social media hashtags and comments, especially when resorted to by celebrities and others, is neither accurate nor responsible.”

While the Khalistani elements were already fomenting the disinformation world over, it seems that the world’s left cabal has also stepped on the bandwagon and started to use this opportunity to take down the person whom they fear the most after Donald Trump – Indian PM Narendra Modi. Anyone who saw the past four years with unbiased eyes has understood that the tactics were always the same, create an issue out of a minor incident, or sometimes out of thin air and then building up public anger on the same utilising half-truths and packaging them as the real thing.