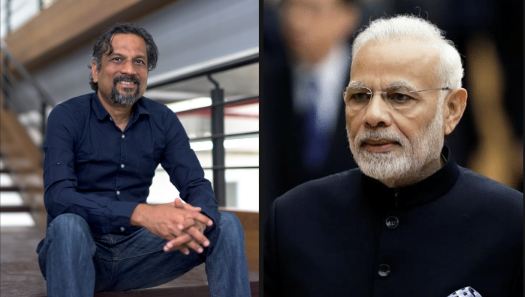 To crackdown upon the monopoly and illicit practices of the big tech, Indian Prime Minister Narendra Modi has appointed a ‘nationalist technocrat’ on the advisory board of National Security.

The influence and power of Big tech on full display in the US elections, helping the Democrats win the US Presidency. The same tech giants have started the same campaign against Indian nationalist’s accounts using tools such as shadow banning, flagging tweets as manipulative and temporary bans. With no regulatory framework to address the issue before, the big tech had roamed free. Now, a technocrat in the advisory board of National Security, the actions and of the big tech will be greatly scrutinised and consequences will be dealt.

Zoho Software Corp’s Founder & Tech Entrepreneur Sridhar Vembu, who recently was awarded the Padma Shri, has now been appointed in the National Security Advisory Board headed by NSA Ajit Doval.

Vembu, who is now in his early fifties, founded ‘AdventNet’ at a time when IT services were raging in 1996 to produce software products. In 2009, he renamed “Zoho Corp” to reflect its move to a new creative online application provider from a software company serving the network equipment provider.

In October last year, Vembu, a Silicon Valley star worth nearly $2.5 billion according to Forbes, moved to a small village in Tenkasi in southern Tamil Nadu.

Sridhar Vembu apart from being a successful tech entrepreneur is also a nationalist, who is not afraid of deranged liberal Twitter trolls who constantly try and malign the right-wing.

Last year, Vembu along with Accenture MD Rama S Ramachandran, were the chief guest at an RSS organized event called “Resurgent Bharath”. Like hungry hyenas, the left-liberal Twitter trolls started attacking the duo and calling them out for accepting the invitation.

Undeterred, Vembu hit back at the trolls for questioning and maligning his political beliefs. He said “I don’t decide my views based on Twitter attacks. If you dislike which events I attend, please do what your conscience dictates and I will do what mine dictates. We earn our daily bread due to our work and we will continue to do quality work. I won’t be responding to attacks.”

I don't decide my views based on Twitter attacks. If you dislike which events I attend, please do what your conscience dictates and I will do what mine dictates. We earn our daily bread due to our work and we will continue to do quality work. I won't be responding to attacks.

The Zoho CEO stood up to the veiled threats of these keyboard trolls. His actions were commendable and also a rarity. Many would have buckled under pressure fearing the impact of such decisions on their businesses.

With left-liberal sentiment dominating the big tech and consequentially how they operate, the appointment of Vembu in an advisory role in the Board of National Security is a signal of the government’s intention to keep the high-flying big tech under its reins.

An appointment of a tech entrepreneur, who understands the tech space, in the advisory board is a sign of impending doom for the Big tech if they continue with their current activities.