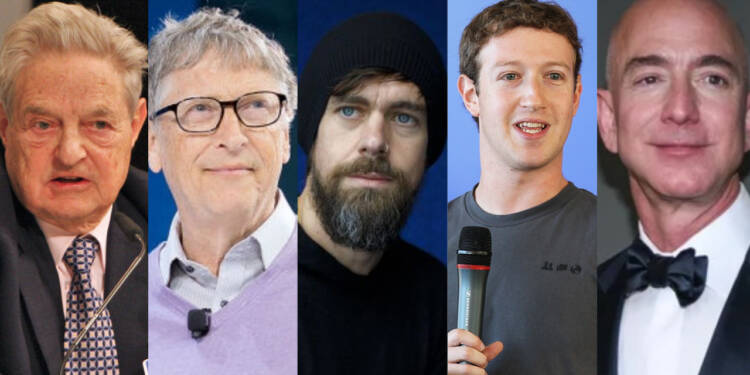 In the last few months, the world has started actively discussing the threat posed by the big tech US companies, colloquially referred to as the ‘Sinister Silicon Six”. However, it is not the companies that are masterminding the narrative that runs in the USA and around the world — it is the 5 billionaires viz. George Soros, Bill Gates, Mark Zuckerberg, Jeff Bezos, and last but not the least, Jack Dorsey who seemingly pull the strings from behind and have the authority to bring down entire regimes, build new ones, and simultaneously force a new yet toxic narrative on entire demographies of a population.

Bill Gates – running his private government in the USA

The first horseman who runs the USA is none other than the founder of Microsoft, Bill Gates. With a wealth of over $120 billion, Gates has unbridled access to the power corridors of Washington. So much so is Gates’ sway in the bureaucracy of the US that for all practical purposes, the entire COVID strategy of the country was devised around the blueprint set by his foundation.

Through his pressure group organisation masquerading as a philanthropic institute, “Bill and Melinda Gates Foundation”, the retired Microsoft founder has been able to demarcate which vaccines continue operating in the USA and the developing nations.

Mr Gates has spent billions to help bring vaccines to the developing world, working closely with pharmaceutical executives to transform the market. That’s certainly a positive point but in doing so, he has become the most powerful and provocative private player in global health. And that is not a good situation.

Reported extensively by TFI, Jack Dorsey, the co-founder of Twitter has admitted in an interview–saying out loud that Twitter, like most tech companies in Silicon Valley, has a lot more left-leaning employees than right-leaners and that effectively comes to play in Twitter’s moderation policies. Twitter is so liberal that conservative employees “don’t feel safe to express their opinions” within the company.

“We have a lot of conservative-leaning folks in the company as well, and to be honest, they don’t feel safe to express their opinions at the company,” Dorsey said.

The right-wing or conservatives as they are called in the West are often shadow-banned or even blocked for pursuing their views on the platform that has 145 million daily active users. The biggest example being Donald trump who was banned instantly from the platform for voicing his sentiments.

The likes of Jack Dorsey spend hefty chunks of their money to fund studies from reputed institutes to wash away their sins and they get the conclusions they pay for.

Brilliantly argued by Tucker Carlson in one of his articles, Twitter’s shadowy practices when it comes to banning and stifling conservative voices is a lucid read.

George Soros – the one, true mafia of the modern-day USA

Then comes George Soros, the man born with a platinum spoon who routinely peddled his agenda in the USA Presidential elections and yet went Scot-free. Soros funds the Centre-left parties in almost all European liberal democracies and has funded the campaigns of Democratic Party candidates- Barack Obama, Hillary Clinton, and now the slow-old Joe.

According to news reports, George Soros had donated $500,000 in the month of May only last year into Joe Biden’s campaign when the Presidential elections were still months away and the pandemic was raging. We may never know the final amount that Soros deposited in USA’s President Biden’s bank accounts but it is for certain that Biden had the crutches of Soros on his side to bring Democrats back in power.

Soros has funded the causes of Globalisation through the agency Open Society Foundations (OSF), which has an endowment of more than 19 billion dollars. And in the last three decades, he has made every effort to accelerate globalisation and weaken the Nationalist values around the world.

Then comes Facebook which uses its mass reach to micro-manage and micro-target the voters. As explained previously by TFI in its articles and videos, Facebook, in a rather nuanced way targets the susceptible voters who have yet not made up their minds on whom to vote. Facebook through its elaborate ‘algorithm scheming’ then peppers the undecided voters with targeted ads that subconsciously force the voter to cast their vote for the liberal candidate.

Enough evidence in the public domain is present to assume that just like Twitter, Facebook is a left-leaning platform. To compound its adversities, Facebook has been mired in the misinformation campaign by the Russians, the Cambridge Analytica Scandal, and other data-theft allegations that have further dented the company’s reputation.

The left ecosystem considers setting narrative its topmost priority, a narrative that it has been setting since the dawn of time. And while digital media has outpaced the traditional forms of media, newspapers still yield considerable influence. The Washington Post, one of the darling publications of the left-liberal cabal is controlled by none other than Amazon’s Jeff Bezos.

While his company Amazon does pay little to no taxes, Bezos still enjoys the clout amongst the political class because his publication has the unyielding power to manufacture narratives and push it on a global scale. Employing left-liberal journalists from across the planet and giving them a column in the newspaper is a tried and tested formula used by Bezos to pressurise world governments.

The new testament had Four Horsemen of Apocalypse but in the 21st century, we have five horsemen who currently make the world go round and will eventually be responsible for its doom. It’s a dangerous world we live in but this is the reality of the situation – a few handfuls of billionaires who run, supposedly, the most powerful country on the planet.

Call it the downside of capitalism or the challenges of a digital world, or simply a travesty, this is the truth in its barest form. God Bless America, indeed!