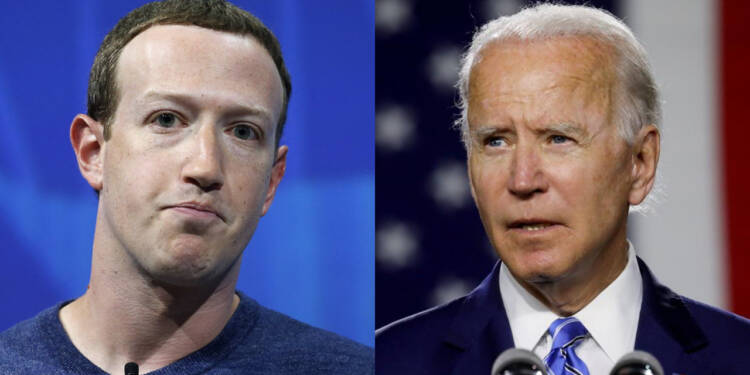 Facebook for long has been accused by scores of people across the world of being a partisan social media platform and also stifling the views of people who appear to have opinions in contestation to some random and haphazard “company policies,” which the Mark Zuckerberg owned behemoth operates by. With President Joe Biden now in the Oval Office, it is spring all over again for the American Big Tech, and Mark Zuckerberg has been caught red-handed exposing his company’s intimate relations with the Democrat regime that has just taken over America.

A brave whistleblower from within Facebook, who continues to work in the organisation as of this moment, released incriminating video footages of top Facebook executives, including CEO Mark Zuckerberg not being able to contain their happiness over a Biden administration taking over the United States. In videotapes which have been released by Project Veritas, Zuckerberg and other executives are seen nearly gloating over the immensity of abilities which they have to mould public opinion in a certain direction. The tapes are of a recent January 21 meeting, and more such exposes have been promised by the whistleblower.

The top executives, particularly Mark Zuckerberg, do not shy away from expressing their utter disgust for former President Donald Trump, who the Facebook CEO claimed had condoned the Capitol Hill violence last month rather than condemning it. In video footage which was meant for highly secretive and private consumption alone, but which has now been made public – Zuckerberg can be heard saying, “It’s so important that our political leaders lead by example, make sure we put the nation first here, and what we’ve seen is that the president [Trump] has been doing the opposite of that…The president [Trump] intends to use his remaining time in office to undermine the peaceful and lawful transition of power.”

Zuckerberg also insinuated, without any evidence of course, that the Capitol Hill mob was being dealt with in a lenient manner when compared to the anarchists who ran a riot across America during the BLM protests. Further, Mark couldn’t help but sing virtues of Joe Biden and his first few days in office, as he was heard saying, “President Biden already issued a number of Executive Orders on areas that we as a company care quite deeply about and have for some time. Areas like immigration, preserving DACA, ending restrictions on travel from Muslim-majority countries, as well as other Executive Orders on climate and advancing racial justice and equity. I think these were all important and positive steps.”

Even as Facebook is supposed to be neutral as a social media platform, Zuckerberg went on to say in the high-level meeting, “The president [Trump] intends to use his remaining time in office to undermine the peaceful and lawful transition of power.” This was during a January 7 meeting. Even while close to half of the voters chose Donald Trump to be their next President, for Zuckerberg to say that the former President was subverting American democracy is indeed evidence enough to prove that the man and his company have a soft corner for Joe Biden.

“Biden already issued a number of exec orders on areas that we as a company really care quite deeply about”#ExposeFacebook pic.twitter.com/KNd0BU7biP

In the same January 21 meeting, footage of which is now out, Facebook’s Head of Global Affairs Nick Clegg addressed the international backlash that resulted from then-President Trump’s suspension from the platform, and with a sense of bravado said that the allegation of private companies having too much power was indeed true, an indication of the fact that cronies at Facebook were making full use of such power to tilt the scales in Joe Biden’s favour prior to the Presidential elections. What is now left for us to say, when top Facebook executives and the CEO themselves are so explicit about their bias, which evidently has a trickle-down effect on Facebook and other platforms owned by it?

Nick Clegg also sought to defend his company’s bias towards Conservatives and right-wingers by saying that a deficiency of democratic rules to govern social media companies meant that such decisions needed to be made in real-time by the company executives themselves. Nick said, “At the moment, those democratically agreed rules don’t exist. We still have to make decisions in real-time.”

The explosive leak comes in the backdrop of Big Tech companies like Twitter, Instagram, Google, Amazon among others mounting a concerted campaign to diminish Trump’s re-election bid. However, that isn’t where these bloodhounds stopped. In fact, after the ‘victory’ of Joe Biden in November last year, Big Tech started concentrating on its ‘right-wing and conservative’ competitors like Parler and Gab, and worked overtime to make sure that their hegemony is not challenged by newcomers who may want to put user freedom and autonomy over all other issues. Collectively, Big Tech has ensured that Joe Biden becomes the U.S. President, while all blame for everything ever gone wrong in America is put squarely on conservatives. While Facebook is just the beginning, a campaign of sorts could soon be mounted to expose all Big Tech companies, by insiders no less.

The leaked footages have gone a long way in exposing what Facebook really is – a digital conglomerate of shameless Democrat stooges. These stooges have already put to display their incredible ability to shape the public narrative to their, and their political masters’ benefit. What the leaked videotapes from Facebook really do, is call upon freedom-loving people not just in the U.S. but across the world to immediately come up with social media alternatives so that dependence on biased and partisan platforms like Facebook can be reduced.