“This isn’t equality, and it isn’t progress,” female athlete speaks out against Biden for his abominable Transgender Executive Order 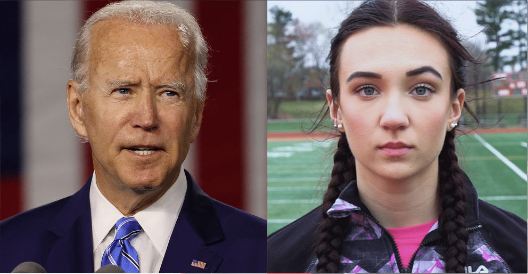 Joe Biden, with the sole aim of stamping his authority on societal norms, signed an executive order removing the concept of ‘gender in sports’. The move created controversy, and now, Selina Soule, an established female athlete has spoken out against the Biden administration to protect the rights and identity of sportswomen in the US.

Four accomplished female athletes filed a lawsuit in federal court in Connecticut in February 2020. The lawsuit was filed by the athletes who were fighting for their right to be sportswomen after they, kept losing track meets to ‘biological males’ who identify as females’.

Selina Soule, one of those athletes, explained in an email how she felt when she learned about Biden’s executive order creating a whole new definition of federal anti-discrimination laws.

In a TV interview on Fox News, Selina outlined why it is unfair for females to share locker rooms and compete against transgender athletes. She said, “There are great biological differences between a male body and a female body. This is why sports have been segregated and that is why it should be.”

President Joe Biden created instant uproar under the pretext of protecting all children when he released an executive order on January 20. He ordered federal agencies in practice to interpret current anti-discrimination laws so that women no longer enjoy the security umbrella that Title IX has long given.

Critics argue that women are critical in anti-discrimination legislation that takes the disadvantaged minority into account. Unfortunately, these very laws are being altered which protect against discrimination not just people with disabilities but also to young healthy young women who chose to take part in sports and want to compete only against other women.

Last year, parents of cisgender athletes filed a lawsuit seeking to bar trans girls from competing on girls’ teams in school sports. The Trump administration sided with the parents, and the Department of Education’s Office for Civil Rights threatened districts of restricting their federal funding if they continued to allow trans girls on girls’ teams.

The executive decision which allegedly inspires its support from Bostock v. Clayton County decision last June is also unfounded. Though the Supreme Court held that “it would be illegal for an employer to fire someone based on their sexual orientation or gender identity status,” it also added that “Under Title VII, too, we do not purport to address bathrooms, locker rooms, or anything else of the kind.”

Future implications of Biden’s decision to abolish the concept of gender could spill out to other parts of the society, which would be damaging to the women rights associations that have come a long way in their struggle to create something for the women. It is disturbingly anachronistic.

Laws should be made to protect people against discrimination on a similar platform. The biological and physical advantage transgender athletes have over their female counterparts makes the playing field unequal. Women have strived long enough against discrimination and the protection to transgenders adds another layer of unequal treatment meted out to the woman in society.

Biden’s agenda, as displayed by his little time in office indicates two things – reversing Trump’s policies and stamping his mark on societal norms. By doing both, he is chafing the societal fabric. The lawsuit filed might just be a start of something if Biden continues to irritate societal norms and structures.

Five Problems of China that Biden solved in 15 days