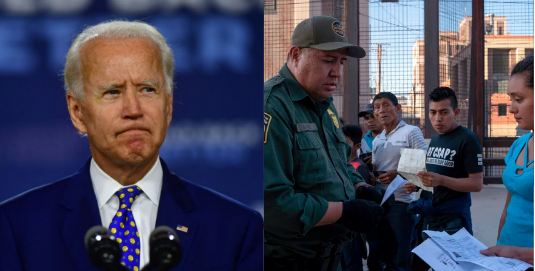 With no restrictions on illegal immigration even amidst a pandemic, it came as no surprise when a Texas state became wary over the swelling number of migrants. It is not just the fact that immigrants are swelling up, but they are being let go by the border patrol without even testing them for COVID-19 and the cost of their testing and providing them quarantine facilities are being paid for by the state of Texas.

On Wednesday, a state senator from the border area of South Texas told Border Report that the City of McAllen “sounded the alarm” to state leaders over the swelling numbers of migrants released last week by DHS officials. To deal with mass immigration during COVID-19, 10,000 COVID-19 test kits have been sent to the city to assess migrants who are being paroled under the recently reimplemented catch-and-release program of the department.

State Sen. Juan “Chuy” Hinojosa said that the test kits were sent after McAllen Mayor Jim Darling last week reached out to Texas Gov. Greg Abbott and Lt. Gov. Dan Patrick, over the swelling numbers of migrants who suddenly were being dropped at the city’s downtown bus station. He said that many of these migrants boarded buses without being tested for the coronavirus.

He stated, “(Border Patrol agents) were just dropping them off at the bus station without testing them. Obviously, that’s very alarming to all of us in that they’re coming from Central America and through Mexico and to be released into the United States without being tested for COVID is really unconscionable.”

The migrants who test COVID-19 positive are sent to nearby hotels to quarantine before getting on public transportation.

While Biden reversed Trump’s policy on immigration, he probably forgot that the world is gripped in COVID-19 and his policy reversals would require certain infrastructure at the border and certain special provisions for states along the border. Or it may have just slipped his mind because of the other 42 executive decisions that he signed in the first week of assuming office in White House.

Border patrol’s inability to check the migrants have put the onus on the state to test these immigrants they never wanted in the first place. Besides, the migrants who test COVID-19 positive are being put into hotels because of the lack of quarantine infrastructure at the border and the cost of their stay is being paid for by the Texas citizens.

The United States is already reeling under the economic repercussions of the pandemic. Biden’s decision to lift restrictions on ‘illegal aliens’ will have a grave impact on the country and not just an economic one as the new US President has incidentally left the states to fend for themselves, but these migrants are also legitimate sources of transmitting the virus.

Texas became one of the first states which saw a steady increase in revenue as they successfully balanced the cases and business interests through lockdowns. Besides, it is also one of the big Republican states which had supported Trump’s immigration ban and his border wall. Now they are being forced to pay for the testing, the quarantine hotels and other basic amenities for the ‘illegal aliens’ they did not want in the first place.

It was Biden’s decision to allow migrants in the US. Thus, it should be the responsibility of the US President to manage their expenses. And, the costs must be borne out of the federal budget and not the state’s budget. Moreover, the infrastructure for quarantine and COVID-19 tests kits must be paid for by Washington.

Biden should be deeply concerned by the tensions this imposition could cause. Texans are proud Americans with a rich heritage. Recently, the spirit of secession has rekindled and the imposition over the state government to pay for ‘illegal immigrants’ could easily boil over into something even bigger.

Macron’s snub to Biden and Xi Jinping: Rejects the Chinese vaccine and embraces the Russian one