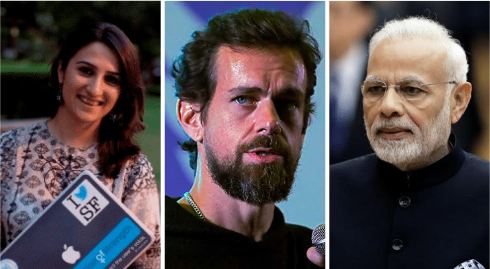 What happens when an American company defies the democratically-elected majority government of India on Indian soil, faced with a leader of Prime Minister Narendra Modi’s stature? The left-leaning American company pays a heavy price. Let’s face it – American Big Tech has been having it too good for too long across the world, especially in a country as democratically vibrant as India. Microblogging site Twitter particularly has earned quite an image within India – of being a brazenly biased and politically compromised platform, which works overtime to stifle the voices of conservatives and nationalists, while handing out a long rope to leftists and anti-India elements.

Only recently, in the wake of the farmers’ protests in India and the January 26 violence effectuated by anarchists masquerading as ‘peasants’, the Indian government had directed Twitter India to block access to 250 vitriolic accounts who were found to be inciting grievous sentiments among the people of the country and sharing absolute falsities via their handles. Although Twitter India did comply to the Indian IT Ministry directive for a few hours, it soon took it upon itself to unblock the said accounts, saying that the content posted by the accounts was “speech and newsworthy”.

What was the specific content posted by such accounts, you may ask? Almost all of the 250 accounts which India’s government directed Twitter to block had used a highly inflammatory and vile hashtag – #ModiPlanningFarmerGenocide. This, mind you, according to Twitter, was newsworthy content. Needless to say, the Modi government is now infuriated, and has taken it upon itself to straighten Twitter up.

In a development which signals that the first moves have been made by the Indian government to tame Twitter, the microblogging site’s Public Policy Director for India and South Asia, Mahima Kaul has resigned from her post. While those in the know of the development have told various media outlets that Mahima Kaul resigned due to “personal reasons”, many believe that Kaul’s resignation has a lot to do with Twitter’s recent spat with the Modi government. It is not entirely impossible that Twitter let go of Mahima Kaul, and shrouded it as a ‘resignation’ of sorts in order to fix its freefalling ties with the Modi government.

Read more: Did Twitter just fire Mahima Kaul, its main face in India, over the spat with the Indian govt?

But why is Mahima Kaul such an important figure in the tussle between Twitter India and the Modi government? For the simple fact that she is anything but neutral, and as a consequence, unfit to serve as the Public Policy Director of the microblogging site for India and South Asia. Mahima Kaul was hardly a friend of the democratically elected government of India. When it comes to her opinions on the ruling BJP and Prime Minister Modi particularly, abusive vitriol was free-flowing on her timeline before she joined Twitter as the Public Policy Director in 2015. As a person with her biases right in place, the Modi government has found it annoyingly difficult to work with Twitter.

As such, having her removed from the position was the only logical step for the Modi government to take. With her gone, Twitter can take some sane decisions which will help bring back conversational dignity and elegance back to the platform in India, which Mahima Kaul was single-handedly up in arms against with her tacit support for the fake farmers’ protests and all the vitriol which came along. With her at the helm of affairs of the platform’s public policy, the international perception was that India is threatening independent journalists reporting on the ongoing protests.

By successfully lying to people across the world of the Modi government suppressing free media, certain handles on Twitter, having tacit support of the platform’s highest executives, took to painting a completely false picture of all that is happening in the country. When exposed in their endeavour to globally defame India and destabilise the Modi government, the same individuals and vested interest groups took to alleging that the government was pressuring Twitter to curb ‘free speech’ of journalists and protestors so that it could quell the protests.

We know all of these assertions to be abject and ridiculous lies. The government of India has gone way beyond it should have, in fact, in trying to placate the protesting farmers who have been agitating on the borders of Delhi due to the sheer fact that they have been misguided and lied to. While Twitter should have played a constructive role in allaying the fears of the select farmers who are threatened by the liberalisation of India’s agricultural sector, the platform instead took to fearmongering and giving a free pass to professional liars and anarchists.

Read more: ‘India is targeting us,’ After being brutally exposed by Greta, anti-India lobby has only the victim card to play

Within India, there is a palpable anti-Twitter sentiment which has come to exist aggressively in the weeks gone by. If there was any doubt about the complicity of Twitter India in the fake farmers’ agitation, a hashtag currently trending in India should put such doubts to rest. #MahimaPleaseDontGo was seen trending on Twitter on Monday, and the tweets thereunder were all by the protestors, opposition party workers and anti-India elements in general.

Twitter has aided in a fake narrative being spread worldwide – that of a Hindu nationalist Prime Minister working to upset and specifically target the Sikh community of the country. This is a lie like no other. If there is one Prime Minister which has gone to astronomical heights to make the Sikh community happy, it is Prime Minister Modi. Yet, he is being targeted by a sophisticated nexus of Pakistanis and Khalistanis. While Pakistanis are rabid Islamists, Khalistanis are their stooges who infatuate about an independent Sikh state, carved solely out of Indian territories of Punjab, Haryana and Himachal Pradesh, while ignoring the fact that over 60 per cent of Punjab is currently under the occupation of Pakistan.

Having got rid of Mahima Kaul, the Modi government has given Twitter one final opportunity to redeem itself, failing which, it would practically stare at the prospect of losing the Indian market. After news spread of the Public Policy Director ‘quitting’ her post, the Modi government sent another notice to Twitter, calling for the suspension of another 1,178 accounts, suspected to be linked to Khalistan sympathisers or backed by Pakistan over the misuse of the micro-blogging platform regarding the farmers’ protests.

It is yet to be seen whether Twitter complies by the fresh directives, failure of which will result in devastating consequences for the American social media platform in India. However, going by the kind of anti-India tweets which Twitter CEO Jack Dorsey is liking these days, it seems he direly wants to be punished by the Indian government, and is no less than asking for it.