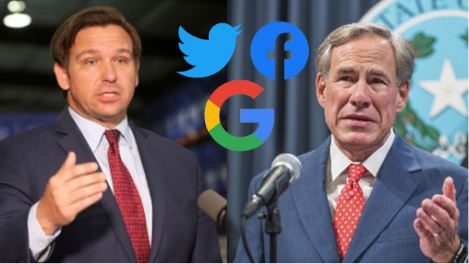 Two red states- Florida and Texas, are looking to wage a new battle against ‘Big Tech’ censorship. After Trump got banned by several social media companies, it became clear that conservative speech in the United States of America is under a grave threat. The mainstream media is already used to ridicule prominent Republican faces and now even social media platforms aren’t free from issues like arbitrary censorship.

Florida is looking to rein in big tech with a legislation addressing censorship, election interference and privacy concerns. Florida Governor Ron DeSantis spoke about the legislation at a press conference earlier this month. He alleged that Big Tech had “come to look more like Big Brother.” DeSantis also alleged that social media companies practised “viewpoint discrimination” and engaged in “coordinated, calculated efforts” to promote a political agenda during last elections.

The Florida Governor made it clear that censorship on social media companies is not acceptable. He said, “They could potentially de-platform a candidate, suppress a message, and that is something that is OK? I don’t think so.” He disclosed that the upcoming legislation titled “Transparency in Technology Act” may include a $100,000-a-day fine for each day a candidate is removed from a platform.

DeSantis also lambasted Big Tech for censoring Trump. Speaking about Twitter’s action against Trump, DeSantis said, “They are not principled in this.”

The Florida Governor added, “They have so much garbage and filth on that platform all the time. They did not censor people when they are using those platforms or the rioting that occurred over the summer.”

Hughes explained the pith and substance of the legislation. The Senator said, “So the bill we’re getting ready to file will say that if a company discriminates against you, deplatforms you, blocks you, kicks you off based on your viewpoint, based on your politics, your religion, based on viewpoint discrimination, it will give you a way to get back online.”

Hughes added, “What we would like to do is to give any Texan who’s being discriminated against, the option to bring an action and we think that will get Facebook’s attention, get Twitter’s attention, and cause them to start treating Texans fairly.”

Florida and Texas have thus opened a fresh front against censorship on social media platforms. The way Donald Trump, the then President of the United States of America, was ostracized by Big Tech instilled a legitimate fear. It seemed as if American laws had failed to catch up with regulation of content on gigantic social media platforms.

The fresh legislation proposals in two red states however show that social media giants won’t be given a license to curb free speech. There will be consequences for arbitrarily gagging Conservative voices and bullying by tech majors won’t be tolerated.