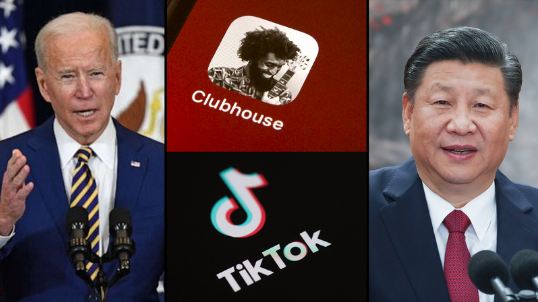 Joe Biden’s policies vis a vis China look intentionally amateurish, it looks as if Biden has accepted the fact that China is going to surpass the USA. The fact that Biden administration is opening the door for the Chinese Communist Party controlled app TikTok at a time when Xi Jinping is blocking the Clubhouse app goes a long way to show where the US foreign policy is going. China is barring its citizens from taking the services of the Clubhouse app so as to keep them away from the foreign political influence, but Biden is opening USA for the Chinese tool for siphoning data to the mainland China.

As per news reports, the U.S. Justice Department on Wednesday asked two federal appeals courts to put on hold government appeals of lower court rulings blocking restrictions the Trump administration imposed on Chinese-owned app TikTok. This comes at a time when the Chinese are banning the last probable platform for the Chinese to connect and converse with the world and deliberate on issues.

The Social Media platform Clubhouse provided the rare opportunity for cross-border dialogue on contentious topics free from China’s usually tight controls. By Monday evening, China’s great firewall had restricted the app as the Chinese censors moved in. Clubhouse had been around since March 2020 but despite censorship and government control rife in China and the US-Sino relations at an all-time low, China did not block the app. But since the time Biden had moved into the White House, it was being predicted that the app’s days are numbered and on Monday evening, the app was restricted. The warning signs were already looming before the censors struck. On Monday, Global Times, a state-run nationalist tabloid, accused political discussions on Clubhouse of being “one-sided. “Political topics on the platform are not discussed as rationally as other topics like technology or culture,” the paper said.

Read more: China couldn’t dare to block the Clubhouse app during Trump era. But in Biden era, the biggest platform of Chinese dissent is shutdown

The Justice Department told appeals courts for the District of Columbia and the Third Circuit that the Commerce Department “plans to conduct an evaluation of the underlying record justifying those prohibitions” to determine if they are warranted by the national security threat Trump described.

Zeng Jiajun, a former tech worker, fell in love with social media app Clubhouse, a window through the ruling Communist Party’s pervasive censorship, after listening to a freewheeling discussion between members of China’s Uighur minority and Han majority that wound up lasting 12 hours.

Thousands of Chinese flocked to the app, which allowed unfettered discussion with people abroad about democracy, Taiwan and other sensitive topics at a time when President Xi Jinping’s government is increasingly hostile to independent voices. However, these progresses were reversed and the Chinese government played an active role in these efforts.

However, the biggest tragedy of these developments is the fact that instead of forcing China to reverse its decision or condemning these actions, Biden administration is playing as Chinese proxies by acting as advocates for the Chinese app TikTok, which shares its data with the Chinese Communist Party.

The cost of one phone call that did not happen: Millions of dollars. Biden’s shunning of Israel is a costly mistake