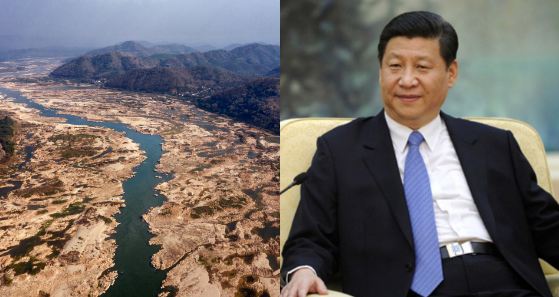 With Donald Trump no longer the President of the United States, China – ruled by its tyrannical CCP regime is back to waging water wars on over 70 million people in the Lower Mekong Basin, and has reduced the flow of the vital river substantially. This has not only raised concerns in Mekong basin countries like Vietnam, Cambodia, Laos and Myanmar, but has also led to a considerable rise in tempers. Reuters has now reported that the Mekong River Commission – an inter-governmental organisation that works directly with the governments of Cambodia, Laos, Thailand, and Vietnam to jointly manage the shared water resources of the Mekong river, has put China on notice.

Water levels of the Mekong river have dropped to “worrying levels” due to outflow restrictions from Chinese hydropower dams upstream, the Mekong River Commission (MRC) said on Friday. It called on Beijing to transparently release water-related data, saying, “To help the Lower Mekong countries manage risks more effectively, we call on China and the Lower Mekong countries themselves to share their water release plans with us.” Interestingly, the MRC also said that the problem of low water levels could be solved if large volumes of water are released from Chinese dams’ reservoirs, making it known to the paper dragon that downstream Mekong nations are well aware of its attempts to hoard billions of cubic metres of water.

China needs 200 billion cubic metres to drain in the water-starved and densely populated northern China from the three massive foreign rivers, the Mekong, Brahmaputra, and Nu-Salween. Thus, water availability decreases in many countries of Southeast Asia. And while China has not been trying much of its luck around with India by fidgeting with the Brahmaputra – Southeast Asian nations are just too small to even figure in the scheme of things for China, which is why it dries them out at will without fearing any backlash.

Read more: China has been hiding its Mekong dams and its “orchestrated” use from the world till now, but they have been exposed

Yet, China had begun behaving itself during the Presidency of Donald Trump, who had the paper dragon by the throat on a multiplicity of issues, including its tampering with the Mekong’s flow to downstream nations. Only last year, former Secretary of State Mike Pompeo had launched the ambitious Mekong-US partnership, which included countries like Cambodia, Laos, Myanmar, Thailand and Vietnam. The new partnership, with added initial investments of close to $150 million, was aimed at complementing the work of U.S.’ pre-existing regional cooperation programme, called the Lower Mekong Initiative (LMI).

In December last year, the Mekong Dam Monitor was also launched, which makes use American satellites to monitor and publish water levels at Chinese-built dams on the Mekong River. In its part of the river, which China calls Lancang, no less that 11 massive hydropower plants have been constructed. These are used by the paper dragon to fill in reservoirs with water which belongs to downstream countries like Vietnam, Cambodia, Laos and Thailand.

Read more: China is literally drying out the Mekong river to starve Southeast Asia and the US is ready for a face-off

As such, China is playing with the livelihoods of over 70 million people, who rely on the Mekong river for food security, agriculture and transportation. The China-triggered fluctuations also affect fish migration in a big way, thus threatening the ecological stability of the region as a whole. With Donald Trump no longer the President, and Joe Biden not giving a damn about the Mekong water wars, China is having a free run, and is sadistically ensuring that the lives of 70 million people are ruined solely due to its hoarding of water.

What’s worse, with Joe Biden at the helm of affairs, China has gone completely rogue, and is not caring to do as much as informing the Mekong basin countries in advance of its plans to disrupt the flow of water. This, in contestation of China’s promise to downstream nations to share hydrological data with them. After the recent drop in Mekong’s downstream water levels began gaining media coverage, China belatedly informed Thailand’s National Water Command Center and the Mekong River Commission of it restricting water flow from its dams, five days after it began doing so.

China, on its part, continues to be dismissive of the fact that it is waging a water war on over 70 million people. Instead, it blames the U.S. for driving a wedge between China and Mekong river countries with claims that 11 upstream dams built by it have adversely affected food security, the environment and people’s lives along the Mekong River. With Joe Biden in the White House making it known that he is a true friend of China, the paper dragon has no answering to do, which is why it has started its tampering with the Mekong river once again. Interestingly, such action was initiated by the CCP only after it became amply clear that Donald Trump would not continue as the President for a second term, speaking volumes about the mental paranoia which the man caused for Xi Jinping.