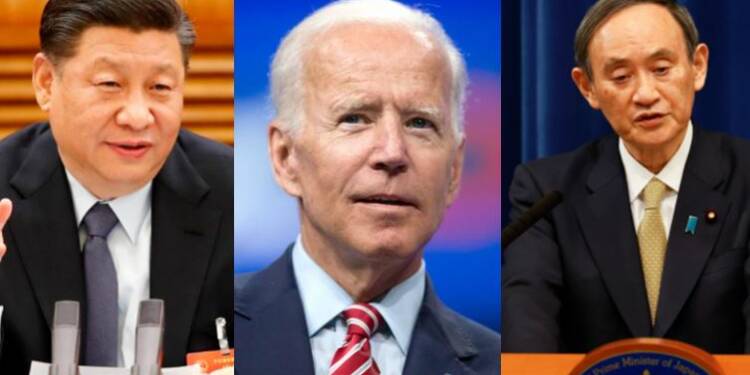 It will be a month next week since Joe Biden was inaugurated as the 46th President of the USA. Since then, the 78-year old President has been slow in dialing up the leaders of various countries but better late than never, Biden has started with the calling duties. However, an interesting point has emerged in the backdrop of Biden calling world leaders that includes the likes of PM Narendra Modi and Japanese PM Yoshihide Suga. While Modi and Suga have been rung up in the night and at ungodly hours which one would not prefer as the right time to have opening diplomatic talks but the Chinese President Xi Jinping has been extended the affable curtsey of receiving a call in the morning office hours.

President Joe Biden’s call to Japanese Prime Minister Yoshihide Suga, on Thursday (January 27) in Tokyo, was the first among Asian countries. Suga received the call at 47 minutes past midnight. The 14-hour time difference between Tokyo and Washington puts that at 10:47 am at the White House. It was first suspected that the call was made simply because Biden, a 79-year-old and the oldest US President to take office, had a strict bed-time. But Suga is himself a 72-year-old but he had to take the Us President’s call at 00:47 hours Japan time.

Trump and Abe, who enjoyed a close relationship, often spoke in the US evening and Japan morning hours. But even between those two, the latest call was a little past 11 p.m. Trump was both an early riser as well as a night owl if his tweets were any indication but he also kept the diplomatic talks scheduled at opportune and responsible hours.

While the White House might give an excuse that Biden is old and frail and thus the late-night call but that doesn’t absolve the fact that he rung up a 72-year old Suga well past his bedtime as well.

While there is no such information available in the public domain regarding PM Modi and Joe Biden’s call but by going by PM Narendra Modi’s tweet, it seems like the call was scheduled late in the night as well. PM Modi posted the tweet on February 8 at 11:03 PM IST on his account, which means the call must have been made in the morning, Washington Time.

Spoke to @POTUS @JoeBiden and conveyed my best wishes for his success. We discussed regional issues and our shared priorities. We also agreed to further our co-operation against climate change.

However, when you compare the timing of aforementioned calls to Chinese President Xi Jinping, it becomes clear as chalk and cheese as to where does Prez Joe Biden and his allegiances lie. According to Asia Nikkei, Biden called Xi on Chinese New Year – an occasion chosen meticulously to mollycoddle the CCP general secretary.

It is being reported that right off the bat, Biden offered his New Year’s greetings to the Chinese people and Jinping. After listening to Xi, Biden is quoted as saying, “China is a country with a long history and great civilization, and the Chinese people are great people.”

It is imperative to note that there is a 13-hour time difference between Washington and Beijing and yet Biden sacrificing his health problems dialed the Chinese leader on Wednesday night, Washington time.

It is these little gestures in diplomacy which reflect a nation’s sincerety towards another nation. Prez Biden’s phone-call pattern shows that he is insincere about his allies and the protocol. In the case of China, Biden made it a point to make a well-timed phone call to a relatively younger, 67-year-old Xi Jinping. This partisanship might look naïve to few but it gives a glimpse into the working of the White House when it comes to China.

In matters of Indo-Pacific and the Quad, both India and Japan are the integral cogs in the wheel, and Japan is the most important Asian ally of the US, but looks like Biden has sided with China if the call timings are any indication. The Democrats have already changed the definition of Indo-Pacific and called China a ‘strategic competitor’ – a clear departure from Trump’s policy, all in the space of one month. And thus the signals do not look encouraging.

China has smelled the rare earth treasure that Japanese controlled Ogasawara is, but Japan has deployed its coast guards to protect it