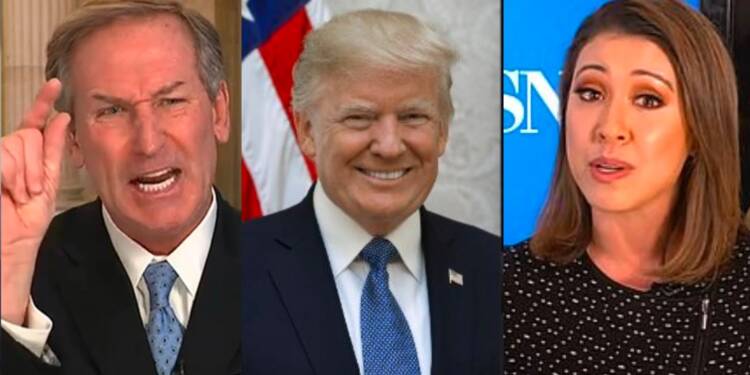 The Democrats had eggs on their faces when their second attempt to impeach former Republican President Donald Trump in the Senate trial spectacularly bombed. The writing was on the wall as the case of Democrats was bereft of any substantial evidence, and only built on the chatter of daft social media echo chambers.

But what showed the extreme desperation of the Democrats was the fact that they went to the lengths of fudging and doctoring evidence to obtain a favourable outcome. However, Trump’s defence attorney Michael van der Veen stood tall, deconstructed every lie of the Democrats, and caught them with their pants down.

In an interview with CBS’s Lana Zak, Trump’s defence attorney Michael van der Veen went on a rampage and called out the Democrats and simultaneously took apart the anchor for belittling the fact that doctoring evidence was a minor offence.

However, what the CBS anchor said afterwards reeked of partisanship and how the liberal media constantly tries to play down the misadventures of its cabal. Casually sidestepping the doctoring evidence debate, Zak said, “To be clear for our viewers, what you’re talking about now is a checkmark that’s a verification on Twitter that did not exist on that particular tweet, a 2020 that should have actually read 2021, and the selective editing, you say, of the tapes.”

He further added, “I can’t believe you would ask me a question indicating that it’s all right just to doctor a little bit of evidence. There’s more stuff that we uncovered that they doctored, to be frank with you, and perhaps that will come out one day.”

When the anchor tried to play a good Samaritan by saying that she was merely asking the question for clarification for the viewers, Michael seemed in no mood to buy any of it.

Trump’s attorney did not stop here and tore apart the left-liberal media which is still fixated on Donald Trump for its ratings and survival, long after he is gone from the White House.

He said, “You gotta live by your words…That’s the problem – the media has to start living by the truth. And not try to create a narrative.”

The former president was acquitted on the charge of “incitement of insurrection” with 57 senators voting to convict and 43 votings to acquit. Sixty-seven votes, that is, a two-thirds majority was required for conviction.

Reported extensively by TFI in the past, there was absolutely no chance that the Democrats would have been able to take anything away from this trial, except a bucketful of embarrassment.

Read more: They tried to end his political career. They failed. Now Trump 2024 is a sure-shot possibility

The political trial of Trump has once again proven that the left-liberal media will go to uncharted lengths to remove its biggest nemesis. However, in doing so, they have made Brand Trump even stronger and if all goes according to plan, Trump might be staging a comeback in 2024 and that certainly has sent the warning bells ringing in the Democrat camp, even when they have barely settled in the White House.