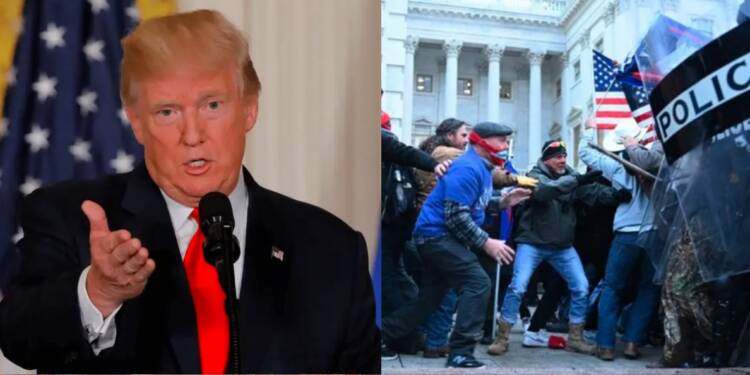 The Capitol Hill siege was a landmark moment. For many, it was a once in a lifetime opportunity to defame the then US President Donald Trump and his supporters over their alleged involvement in the incident. And to top it all, Trump haters went as far as politicising a Capitol cop’s death. We are talking about Capitol police officer Brian Sicknick.

Trump haters have been relentlessly using Sicknick’s unfortunate death to intensify their hate campaign against the former US President Donald Trump. For the past one month, the anti-Trump media has been saying that Sicknick was killed after being struck by a fire extinguisher during the Capitol siege. But the media version is again far from reality and a dastardly attempt to defame Trump supporters.

The fire extinguisher theory gained traction after a report published by the NYT on January 8. The report is entitled, “He Dreamed of Being a Police Officer, Then Was Killed by a Pro-Trump Mob.”

NYT claimed, “On Wednesday, pro-Trump supporters attacked that citadel of democracy [i.e., the Capitol], overpowered Mr. Sicknick, 42, and struck him in the head with a fire extinguisher, according to two law enforcement officials. With a bloody gash in his head, Mr. Sicknick was rushed to the hospital and placed on life support. He died on Thursday evening.”

But the report regarding Sicknick’s death, which blamed it all on Trump’s supporters, stands amended. NYT added a clarification of sorts that reads, “[n]ew information has emerged regarding the death of the Capitol Police officer Brian Sicknick that questions the initial cause of his death provided by officials close to the Capitol Police.”

Let us tell you what this “new information” is. While the mainstream media narrative was that Sicknick succumbed to the injuries sustained on being attacked by a fire extinguisher, KHOU in Houston had a different version. It made no mention of the officer being struck by a fire extinguisher. Rather, it claimed that Sicknick died due to the stroke that occurred “at the Capitol during riots.” Yet, for one whole month, Trump was being defamed over Brian Sicknick’s death.

Just an absolute falsehood about how Officer Brian Sicknick died, spread over and over by the people with the largest media platforms, to millions and millions of people who will probably never learn that they were deceived yet again. pic.twitter.com/vMmOKlVmi8

A brief look at Twitter will expose how Trump is still being blamed for the incident, while NYT conveniently reports, “Law enforcement officials initially said Mr. Sicknick was struck with a fire extinguisher, but weeks later, police sources and investigators were at odds over whether he was hit. Medical experts have said he did not die of blunt force trauma, according to one law enforcement official.”

Very sad
The remains of officer Brian Sicknick’s to lie in honor within the Capital Rotonda.

i’m sorry but this man’s blood will always be on the hands of Donald Trump #Briansicknick #OfficerSicknick #sicknick pic.twitter.com/OdJcWfVEpY

Is what the American mainstream media did, just a mistake? This sounds worse. The newspaper outlets and corporate media houses that claim to fight disinformation have spent an entire month making up some abominable stories.

It is absolutely impossible that authorities, including those who performed the autopsy, didn’t know very early on that the story being spread over and over by the media — that Sicknick was killed with a fire extinguisher by a pro-Trump mob — was false.

How did the fire extinguisher theory to defame Trump’s supporters even come into the picture? And even after the autopsy was performed, there was no immediate rectification by media houses that claim to be in the know of things. Had it not been for the pressure exerted by the right-wing media, the mainstream media houses would have never corrected themselves.

The alleged fire extinguisher angle behind Sicknick’s death was thus a grotesque and shameless conspiracy to slander Trump supporters.