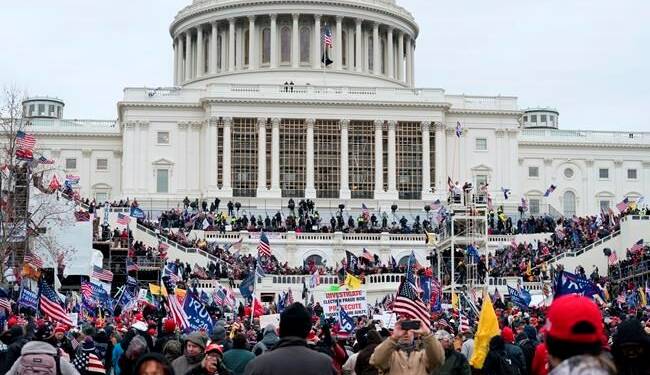 “Protest is patriotic. Protest is American.” We are not saying this. This is what democrat politician Pramila Jayapal said when anarchy gripped the streets of every major city of the US. Today, her language is a bit different and severe. Today, she calls the protesters ‘domestic terrorists’ because today, the protesters are from Team Trump. The entire world is watching how the US Capitol Building was stormed by protesters at a time when the oldest democracy in the world is supposed to move towards a peaceful transition. But now that we look at it, whatever happened in Washington DC last night was actually Newton’s Third Law of Motion in action- every action has an equal and opposite reaction. This is how the law of nature always works.

No one can justify the Capitol breach. Four people, including a woman, have died in the ensuing violence. But why did Trump supporters suddenly feel the need to storm elite offices in the Capitol like House Speaker Nancy Pelosi’s office, apart from briefly gaining access to the Senate chamber?

From Georgia to New Mexico, hundreds of Trump supporters are opposing Biden’s poll ‘victory’. They have been waving signs such as “Stop the steal” and “Four more years.” In states like Arizona, Okhlama and Georgia also, protests were observed.

They are protesting because they feel that Democrats stole the elections and that Trump is the rightful winner. They even tried to show discrepancies in the poll process. Yet, the institutions didn’t help them and the left-dominated media kept dismissing their concerns as groundless. And now, they might be feeling that even the Republicans are themselves getting divided over the debate around election fraud.

However, when it comes to storming the Capitol in D.C. per se, the Trump supporters actually took a leaf out of the Democrats’ book. Today, Democrats are talking about impeaching the US President Donald Trump over anarchy, and lack of rule of law. But last year, the same Democrats were instigating anarchy in the form of ‘Black Lives Matter’ (BLM) protests, following the custodial death of George Floyd, an African-American.

And why just the BLM protests? Democrats have always encouraged anarchy in order to topple Trump. Even after Trump won the 2016 Presidential polls, Democrats were alleging that Republicans stole the elections. Last year, Democrats started ridiculing Trump supporters as racists and white supremacists for condemning the violence, looting and rioting that hijacked the BLM protests.

Organisations like the far-left Antifa took over the BLM protests, while Democrats made a political issue out of the protests-turned-riots. The vandalism took a grip of almost every major American city. And while Trump wanted to restore law and order, Democrat lawmakers were saying, “Protest is patriotic. Protest is American.”

Even the White House was not spared in the intense rioting instigated by Democrats. And a crowd of rioters had tried to breach even the White House. Had the BLM campaign managed to achieve what it aspired, the White House would have witnessed scenes far uglier than what the Capitol building had to witness on Wednesday.

Protest is patriotic. Protest is American. Love of country means you never stop fighting to make it better. https://t.co/5X9Qvp7xR4

When it came to an elitist Democrat’s right to protest, those who are crying foul today could not care less for all the anarchy and violence that had engulfed the US last year. Far-left politicians and activists even supported the illegal hijacking of the Capitol Hill Autonomous Zone in downtown Seattle, last year.

BLM protests were never protests. They were always a riot. And while Trump has now called for peace from his Twitter handle, Biden or Kamala Harris never bothered to make an appeal for maintaining peace when it really mattered during the violent BLM protests.

I am asking for everyone at the U.S. Capitol to remain peaceful. No violence! Remember, WE are the Party of Law & Order – respect the Law and our great men and women in Blue. Thank you!

Joe Biden will NEVER stand up to the Liberal Mob. pic.twitter.com/dVcpbKN9KS

Yet, while leftist rioters in the US were wounding American pride and damaging public property, Trump’s ‘silent majority’ didn’t react. It simply watched, watched and only watched. Trump’s supporters wanted to make a loud statement at the polling stations later on.

However, when the ‘silent majority’ was handed a so-called poll defeat last year, following an election process that they couldn’t even trust, Trump’s ‘silent majority’ could simply not remain silent. So, Trump supporters reacted and their reaction didn’t turn out to be very civilised. After all, it was an equal and opposite reaction to what the Democrats were abetting for the past one year.