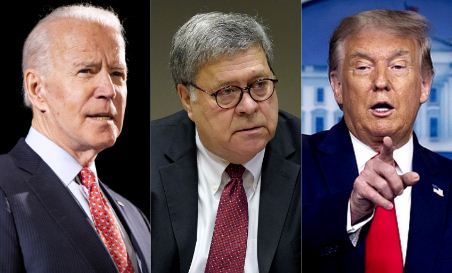 The legal battle to become the most powerful person in the world is gradually now peaking, as President Donald Trump and media-declared President-elect Joe Biden fight it out post-polls to make it to the inauguration on January 20. In what comes as a major development, the U.S. Attorney General Bill Barr and Department of Justice, which the man heads, have begun issuing conflicting statements with respect to whether there was really any major voter fraud in the recently concluded presidential polls. Attorney General Bill Barr says there was no major fraud which could have impacted the result of the election, even as the Department of Justice dismisses the same assertion indirectly.

In an interview to the Associated Press, Bill Barr had said that the U.S. Justice Department has uncovered no evidence of widespread voter fraud that could change the outcome of the 2020 election. The Attorney General was quoted as saying, “To date, we have not seen fraud on a scale that could have effected a different outcome in the election.” For such a statement by the AG to come close to a month before the inauguration was definitely a blow for President Trump.

However, the Department of Justice was quick to call out the lies of democrat media, with a DOJ spokesperson saying, “Some media outlets have incorrectly reported that the Department has concluded its investigation of election fraud and announced an affirmative finding of no fraud in the election.” The spokesperson added, “That is not what the Associated Press reported nor what the Attorney General stated. The Department will continue to receive and vigorously pursue all specific and credible allegations of fraud as expeditiously as possible.”

Read more: Do you know Donald Trump can still be the President of the United States? Here is how

Attorney General Bill Barr is seen as inclined to President Trump and is even referred to as the President’s ally. For him to discount the theory of there being massive voter fraud in the US in the recent polls surprised many, and even raised questions as to whether he had got himself a deal fixed with the American deep state and democrats. In fact, to the same effect, Joe Biden even sarcastically joked, saying, “Barr had just called him ‘asking if I can get him in the witness protection program for endorsing me.”

Bill Barr, at least prior to his Biden-sympathetic statements, was being seen as one of the top officials who will be sacked by a Democrat-administration. Now, however, Barr seems to be securing a future for himself, one which is assured with the continuation of his term as Attorney General with the blessings of Joe Biden, who seems to be pacing ahead of President Trump as of now to become the 46thPresident of the U.S.

Read more: Joe Biden will have no option but to follow Donald Trump’s “Indo-Pacific” strategy

ABC News reported that subsequent to the Attorney General’s comments on voter fraud not being seen to an extent that it could have affected the outcome of the election, President Trump held a meeting with Barr. A source briefed on the meeting described Barr’s interaction with the president as “intense”. In fact, the Washington Post also reported that President Trump privately expressed his anger toward Barr and has even floated the possibility of removing him. The Attorney General, therefore, perhaps in a bid to secure his tenure by siding with Biden’s narrative, could very well end up getting sacked by Donald Trump himself.

While President Trump himself has not commented on the needless remarks of Bill Barr, his personal attorney Rudy Giuliani and his political campaign issued a scathing statement claiming that, “with all due respect to the Attorney General, there hasn’t been any semblance” of an investigation into the President’s complaints.

As the United States nears January 20, uncertainty continues to loom at large about the fate of the White House and whether Biden will become the 46th President. However, it goes without saying that President Trump can still pull a fast one over Joe Biden if he so chooses, and not anyone will be particularly surprised with the same.